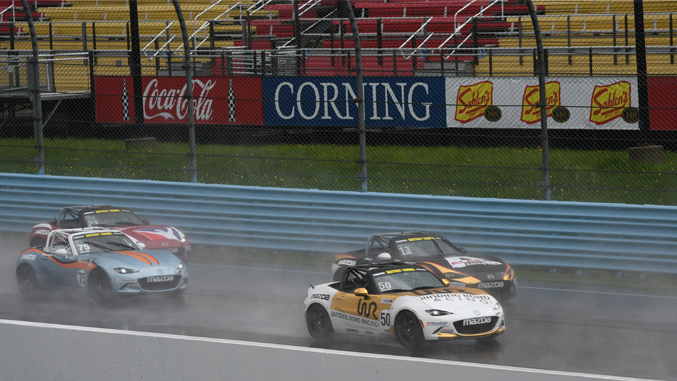 How important to your results is the team you race with? Critical, right? When working within any team environment, you really have three options:

It’s this last option that I want to focus on this time around.

I call this the “Schumacher Factor.” Not many, if any, race drivers in the history of the sport did as good a job in this area as Michael Schumacher did. Is it mere coincidence that both Benetton and Ferrari became world champions during the time that he drove for them? No way. He made these teams world champions. He motivated the people around him to do whatever it takes to give him the winning components. He elevated the personal performance of each and every member of these teams. And the fact that many of the key personnel followed Michael from Benetton to Ferrari speaks volumes. You have to do the same for every single person around you, whether they are part of the race team, your family, sponsors, or supporters.

Whether you are a one-man team, or part of a large professional race team, to be successful you must be able to get the very most out of everyone around you. And, it doesn’t matter whether that is the one person you have to contract something out to, your family for moral or financial support, or the multitude of people on a pro team. To do that you must understand how to motivate these people to go above and beyond what they would or could have done without you.

It has been said that the sign of a true champion or superstar in any activity is not in what he can achieve on his own; it is his ability to help everyone on his team, from the lowliest and worst member on up, to rise up and perform beyond expectations. Some say that the Golden State Warriors won the NBA championships they did because of Steph Curry and Kevin Durant’s abilities, and yes, their accomplishments were a factor. However, it was their inspiration and motivation to the rest of the team that was the real deciding factor. They made every one of their teammates better players than they would have been without him.

That is what you need to do.

Now, I’m going to use a word to describe how you need to deal with the people around you that may sound unfair and negative, but it is not meant in that way. The word is manipulate. You must learn how to manipulate people, but in a positive way.

As you know, there are many ways to say the same thing. For example, if you want a person to do something for you, you can tell them to do it. Or, you can ask them to do it. Or, you can phrase it in such a way as the person thinks it is his or her own idea. Each of these methods will probably result in the job getting done, but only one of them will result in the person performing the task better than ever before. And, the method that works best for one person may not be the best method for another.

The key is for you to determine what the right approach is for each and every individual. You must discover how to inspire, motivate and manipulate each person to rise up and perform beyond expectations. To do that you must begin to understand what makes the person tick: are they a leader or a follower; do they communicate and learn visually, auditorily, or experientially; do they like to come up with the ideas themselves, or would they prefer to follow someone else’s ideas; do they respond best to telling them what to do, or just asking a few questions to guide them in the direction you want; do they like for you to sit back and watch, or join in the task; and so on.

Take a few minutes right now and identify every person on your “team.” Write their names down on a piece of paper. Again, I don’t just mean the person or people that work on your car. I mean everyone who plays a role in your racing career: family, supporters, media people, and so on. Every person that has or can have an influence on your racing.

Next, really think about each of these people. What motivates them? Are they leaders or followers? What’s the best way to communicate with them? Do they like to be asked to do things, or told? Do they prefer things to be “their” idea, or are they willing to let others take credit for the ideas?

There is no doubt that Michael Schumacher was one of the most talented race drivers to have ever lived. However, one of the main reasons he was so successful is what he did outside of the cockpit. He got more out of the team around him than any of his competitors – as much or more than any other driver in history.

Schumacher also kept a strong core of key people around him. As I said earlier, when he moved from the Benetton team to Ferrari, a number of key personnel moved with him. He was loyal to the people who helped him win, and they were loyal to him. That’s very important in your efforts to build a strong team. However, you must always believe, and be on the lookout for someone better you can surround yourself with (engineer, mechanics, crew, etc.). That may sound disloyal and blunt, but it is a fact of life. Just as you must always strive to improve your abilities, you must always strive to improve your team with better people.

If you can’t motivate your team to continue to improve their level of performance, it is less likely that you will achieve all of your racing career goals.

Speed Secret: No matter what level of racing you participate in, you are a team builder.

If you believe that all you need is to be blindingly fast behind the wheel to make it to the top in racing, you’re wrong. Building your team is just as important to your career as being fast.

Video: Passing On “Flow” Tracks Can Be Tricky