Speed Secrets: Stating the Obvious… “You Are Doing It Wrong!” 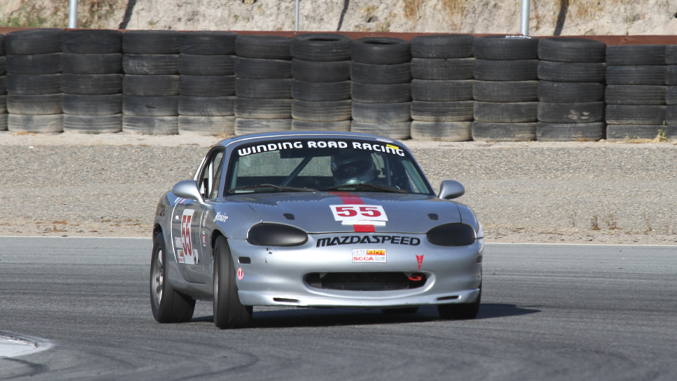 Doug Juenke has been a lead coach for Hooked on Driving Northern California region for going on seven years now, so you know he’s seen more than a few mistakes (along with a lot of great driving, too). When I asked Hooked on Driving coaches for their advice, the following article is what Doug sent. – Ross

Okay, so that title sounds a bit judgmental, but hang in there with me. I have come across this phenomenon many times through the years at tracks up and down the west coast – well, virtually every time, to be honest! When I stand at the wall, watching the group go by for the first two twenty-minute sessions, I begin to notice the OBVIOUS. Some of them are doing it all wrong!
Now, for the record, I am not a Lemons-winning driver, nor have I competed in Indy Car or Formula 1, but I do know the line and take pride in that knowledge. I want to help every driver get better at driving the line.
So with that thought process, I continually notice that “experienced” drivers do not drive the line, and may, in fact, not even be close. I then explain to the group that simply doing something over and over is not necessarily the right thing…and this is why:

Think of a tennis player who practices every day. They hit the ball and volley and return serves and on and on and, if asked at the end of the day, they would swear that they are, indeed, getting better. The problem is that they have been practicing the wrong way or wrong technique and thus they have gotten really good at the wrong things.

This is how it translates into track day driving: if the experienced driver hasn’t received any real, sound advice or observation from a third party, they would also think they are kicking tail while on the track. The fact is, they might be good at jerking the wheel (no smoothness), braking forever or too much, and may have no concept of the correct line around the track.

For example, I had a regular driver in his GT2 Porsche whom I always thought was going gangbusters and definitely was one of the quickest of the group. Thus (not being so intelligent), I decided to go sit in the right seat and see what the heck this guy was doing right! Well…by the end of the first lap, I realized everything he was doing wrong!!! In about five or six places on the track, he was coasting… full-on- no-throttle whatsoever! Now, mind you, we were doing triple digits, so I guess coasting is relative, but it’s coasting, nonetheless.

So, gingerly, I asked if I could offer some advice as we rolled along on a straightaway, to which he agreed. Basically I asked what in the hell he was doing “lifting”?  He replied, “I am not lifting….”  To which I replied that he sure was (which makes for interesting tracking, having an animated discussion at 100+!). From that moment on, every time he lifted, I pointed it out and by the end of the third lap, my guy had a complete revelation. He was lifting AND did not realize he was doing it. That was simply how he had driven for a couple years and no one had ever pointed this little thing out to him. And because he was among the fastest, he did not think he was doing anything wrong.

After the session, he thanked me for my time. As with many drivers these days, he had some telemetry on his car to review. I am sure he was thinking I was a turd, but away I went to my next driver. Right before our next session, though, he came up to me with a bigger-than-life smile to let me know that even with my fat carcass in the right seat, he was three seconds FASTER than he had ever gone before, period!  And to this day, he always says to me, “I am not lifting….“  So doing it wrong and getting good at doing it wrong is still doing it wrong, in the end!

As a lead coach, I try (with a large map in front of the group), to go through many of the corners to show where their cars should be and what they should be doing to prepare to be at that spot (for example—heading into turn 1 at Thunderhill, they may want to line their entry up for the second brake marker… and so on), so that they will have specific goals for the next session. In this way, no one is singled out and no one is attacked, but to date, and after all these years, no one has punched me in my personals or come back saying that they are slower than before or that my insight actually sucked bongos.

Sometimes, the simple knowledge that someone (i.e. a group leader) was watching and willing to offer some sound, basic advice can be very well-received by experienced drivers; they will come back to say, “You know, in that corner, I get it now…it is sooo much smoother than ever before….” I have actually had experienced drivers say that no one has given them advice on how to get better during their time at the track and I think that comes down to egos (in other words, “Who am I to give you advice…?”) But in truth, like all good athletes, truly achieving drivers will accept good advice, properly given.

If there are any coaches reading this, realize this: you are the goofy nut that is willing to get into a strangerʻs car to try and show them how to get better and, in many cases, those drivers really value your input; do not be afraid to state the obvious if, in fact, it is. Sometimes, they are simply doing it wrong and just need to know it AND how to get better, moving forward.

Remember this, we play for real and when things go wrong, bad things happen and people can be hurt, so helping a fellow enthusiast get better and thus safer, is never a lost opportunity.

Do You (Really) Want To Race In A Great Series?