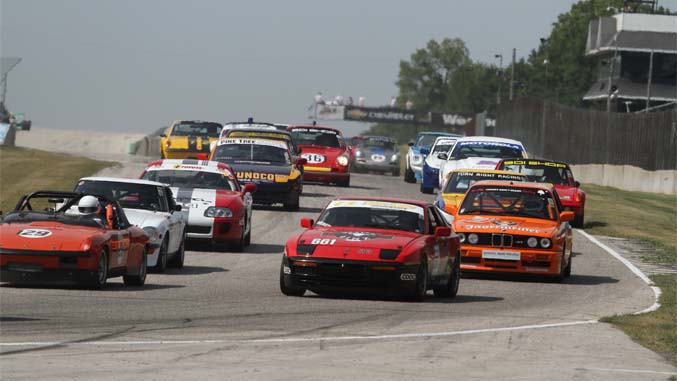 For some reason it seems appropriate to make a big deal out something with a big even number. Like the number 200. And this is issue number 200, so I'll make a big deal out of it. Well, "big deal" is a relative term. All it really means is that I'll take on the role of writing the feature article this week. Big deal, right?!

In thinking about the number 200, I realized that's about how many emails I get each week asking for my thoughts, comments, opinions or answers about a topic or question. In this issue, then, I'll answer a few of them. Not 200 of them, but some. Well, three (197 to go).

Q: It makes sense to me that I should always threshold brake – for every corner – but I was told that isn't the case. Why wouldn't I always want to threshold brake in the braking zone?

A:  Let me start by revisiting an important concept of performance driving: The more balanced a car is – meaning the weight of the car is equally distributed over all four tires – the more traction it has. In the past, I shared a link to a video I produced a while ago called Why Smooth Is Fast that explains this, but for now I'm going to assume you know that a car that is balanced has more grip than one that is experiencing weight transfer – like one that is in heavy braking, with more weight on the front tires than on the rear.

Some corners, such as relatively tight ones, require you to change the direction of the car a lot. In this type of corner, you need to get the car to "rotate" (think about looking down on your car from directly above, and imagine it rotating, like it would if were the hand on a clock). In this corner, you would sacrifice some overall traction in return for getting the car to change direction or rotate more. Heavy threshold braking right up to the turn-in point, and then a relatively gradual release of the brakes as you turn in (trail braking), will help get the car to rotate. All good.

Now imagine approaching a corner that requires little change in direction – a long, fast, sweeping corner. Your speed adjustment (the amount you brake, or even just lift off the throttle) is short. If you were to threshold brake, causing heavy weight transfer to the front, you would have less overall traction right at that moment in time – right when you're turning into the corner. Not good.

Instead, with a fast, sweeping corner like this, a lighter brake will often result in you being faster, even if that means you have to brake for a longer period of time. Lighter, longer braking means the car is better balanced, and therefore it has more overall traction – and that means you're able to drive faster through the corner.

And never forget that there are no fast and hard rules. A longer and lighter brake zone may work for most high-speed sweeping corners, but not all. Part of the fun of performance driving is figuring out what compromises each section of track requires.

Q: I was wondering if you could answer the following for me as I am a little confused at the Senna video here. He blips the throttle a few times whilst exiting each corner. Could it be that the throttle position is not linear and he is trying to get some even weight transfer to the rear but not too much.

A: I hate Ayrton Senna! You know why? Because, despite him being one of, if not the best driver of all time, he did a couple of things that may not have been perfect. And what this proves is that it's possible to be one of the best, even with a few oddities.

Remember a few years ago when CEOs and business leaders were all trying to copy what Steve Jobs did? Some went so far as to start wearing black turtleneck sweaters! They thought that if they copied him, they would be as successful as he was. But here's the thing: Could he have been even more successful as a leader if he'd treated people better? Keep his amazing visionary traits, continue to be creative, stay fanatical about the details of design – all of the things that made him successful – but also be a great "people person." How much better would he have been?

Same with Senna. Yes, he tended to blip and stab at the throttle exiting corners, which is not smooth. But he made it work. I suspect he found that he could use it to manage the tires' grip levels, and use the weight transfer to his advantage. It worked for him, while it doesn't work for most drivers (which is why it's not taught or recommended).

I should also point out that a driver can make what seems like an un-smooth movement with the steering wheel or pedals, and yet have the car moving smoothly. If you see a driver driving at the limit, with the steering wheel moving quickly, your first thought is likely, "Well, that's not smooth." But it could be. If the tires are at their very limit, moving the steering wheel a small amount has little to no effect on the direction of the car because there is slip between the tire and the track surface. Where the smoothness needs to be is at that surface, and in the way weight is transferred. Just because the steering wheel is being moved quickly, and the pedals are being modulated quickly, that does not necessarily result in the car moving in a un-smooth way.

Senna also leaned his head into corners more than he should have. Our brains are used to receiving information from our eyes with our heads upright. When we tilt our heads, the brain takes a little longer to interpret the information coming in, and it may not even be as accurate. So keeping our head upright when driving is important – it's giving our brains better quality visual information to work with.

But look at photos or video of Senna, and you see his head tilted. Again, could he have been even better had he made keeping his head more upright a habit, instead of leaning it? I think so.

One thing no one can argue with about Senna is his strong belief in himself. I've often said that no matter what your skills, techniques or anything else is like, if you believe strongly enough in yourself, you'll be successful. Is it possible that Senna's belief system over-powered his lack of smoothness with the throttle, and the way he leaned his head?

Okay, I don't hate Senna. I just wonder how much better he could have been if he had done some things differently? Imagine that.

Q: How important is blipping the throttle when I downshift? Do I need to do this?

A: Critical and yes! Unless you're driving with an automatic, semi-automatic, or a manual transmission that revs the throttle for you, you should absolutely blip the throttle on each and every downshift.

In most manual transmission cars, that means heel & toe downshifting. I'm not going to get into the "how" of this necessary technique, but I will talk a little about the "why."

Downshifting without blipping the throttle upsets the balance of the car, it puts more wear and tear on your car's drivetrain, and most importantly, it can cause the driving wheels to nearly lock up as you let the clutch out. I doubt there's a driver reading this who hasn't let the clutch out during a downshift rather abruptly, causing what best could be referred to as "sudden deceleration." And if the steering was turned even the slightest bit at this time, the car lurched and started to spin. That's why blipping the throttle on downshifts is so important.

Oh, and you can't do the "brake, lift my foot off the brake to blip the throttle, then back on the brake again" routine. Every time you lift off the brakes, you're not slowing down – and that's your whole purpose at that moment in time.