Speed Secrets: How to Practice 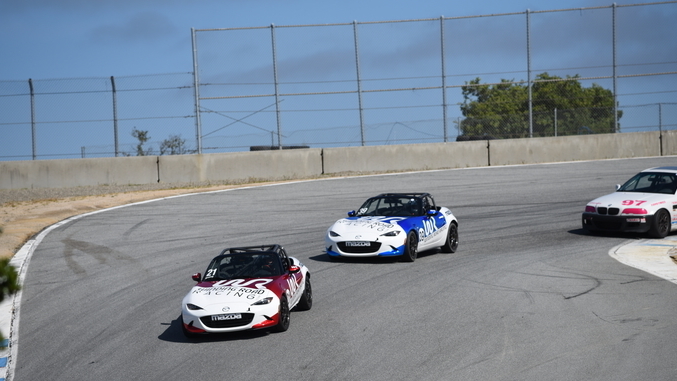 Your mental approach to testing and practice is important. You want to simulate the competitive spirit and environment as closely as possible. You want the same intensity and aggressiveness in practice as you do in the race. If you practice at 99%, that's how you will perform in the race. It's very difficult to get back to 100%.

SPEED SECRET: Practice how you plan to race, and then you'll race as you practiced.

This programs your mind so that, under actual race conditions, you instinctively respond. Treat practice and the race with the same respect and intensity. When you practice, it should be with the same mental focus and determination as if you were in a race. Then, during a race, you will be as relaxed and calm as if you were practicing.

There is no point in ever going on a racetrack if you’re not going to drive at 100%. If you’re testing or driving an endurance race where you may not want to drive right at the limit, you should still be 100% focused, have 100% concentration. There is no reason to ever think that a sloppy turn-in is “good enough.” You don’t want to make “good enough” a habit. The only way to ensure that doesn’t happen is to always drive at 100%.

We often believe the more we practice a skill or technique – over and over again, many times – the better we'll get. This is not necessarily true. Experience is not always all that it’s cracked up to be. In fact, every time you practice a technique incorrectly, you're increasing your chances of doing it wrong again. It’s easy to become very experienced at repeating the same mistakes.

A driver can practice many of the techniques required to win while driving on the street. Practice smooth consistent braking; squeezing and easing the throttle; arcing the steering into and out of a turn; picking the Ideal Line through a corner; being smooth; and keeping the car balanced. You don't have to drive fast to do this. This is not just physical practice. Just like a golfer or tennis player "grooves" his swing, you are "grooving" your car control techniques. Each time you apply the brakes or turn the steering wheel your actions are being "programmed" into your brain. The more your technique is "programmed," the easier, smoother, and more natural it will be in the heat of the battle on the track.

A lot of race drivers practice bad habits when driving on the street. They don’t hold the steering wheel properly, they rest their hand on the shifter, they don’t squeeze the brake and gas pedals, etc. How do they expect to drive any differently at speed, on the racetrack when they’ve just programmed those techniques into their head? And, if you can’t do something at slow speed on the street, you’ll never be able to do it naturally on the racetrack. It’s the same with any sport. What do you think would happen if the top tennis player in the world practiced hitting one-handed backhands all year, and then went to Wimbledon and played using a two-handed backhand?

One of your objectives during practice is finding the right chassis set-up for the race and/or qualifying. For the race, you want a comfortable, consistent, reliable set-up. For qualifying, you may want a set-up that is less "comfortable" – perhaps with less aerodynamic downforce – but is fast for one or two laps. A good race set-up allows you to know you can move up from where you qualified.

The first few laps of a practice session may be the time to bed in new brake pads or scrub in a new set of tires. Generally, with most brake pads, the trick is to gradually heat them up by braking heavily (but be careful as they can begin to fade at anytime – so brake hard, but early), and then run a few easy laps to let them cool. As this is not always the best procedure for bedding pads – and some come pre-bedded – check with the manufacturer first.

Concentrate in practice and testing on the car's set-up and what you can do to improve it. Part of your job is to become sensitive to what the car is doing.

Check the brake bias by overbraking at different locations to see if the front or rear tires lock-up first. How is the handling in the slow corners? The medium speed corners? The fast corners? How's the initial turn-in? Does it understeer or oversteer? What about the middle of the corner? Does it put the power down well on the exit of the corner, or is there too much wheelspin? Does the car bottom out going over bumps, or can you get away with lowering it? Does the car feel too soft – does it roll and pitch too much in the turns? Is it too stiff – does it feel like it's "skating" across the track with too little grip? Are the shocks too soft or too stiff? What are the effects of an anti-roll bar sweep?

How are the gear ratios? What is the maximum RPM on the longest straight? Are there corners where having a slightly taller or lower gear ratio would help?

Consider how each change interrelates. For example, if you change the handling to better suit one particular corner, will the gear ratio still be correct, or will it now be too low with the extra speed you're carrying? Consider the top gear ratio – what about in a draft? Will it be too low a gear when you pick up a few extra MPH in the draft?

Obviously, you can't do much or any of this development of the car's set-up until you know the track well. If you're making improvements each lap in your driving, how are you going to know if a change you made to the car helped or not? This is where consistency comes in.

At the same time, practice is where you should try different things. Try taking a corner in a taller gear. Try braking later and carrying more speed into a turn. Or the opposite – brake earlier and work on getting on the power earlier in the turn. Which works best. Follow a quicker car, watching when it brakes and how it takes the corners.

De-brief with your engineer, mechanic, or just yourself after each session. Make notes on everything about the car and your driving.

The real question you need to ask yourself is this: "What can be done to go faster?"

One final comment about practice. It's dumb to crash in practice. This session is really to learn the track and to find the right set-up for the car so you will be quick in qualifying and the race. Don't waste it by crashing. There's not much satisfaction in having someone say, "It's a shame about that crash – you almost won that practice session!"

I’m not saying you shouldn’t push to the point where you will make mistakes. In fact, practice is the time to experiment and test the limits, and that means you’re going to make mistakes. But do what you can to make them small enough that they don’t result in a crash.