Speed Secrets: Getting Ready For Your First Race 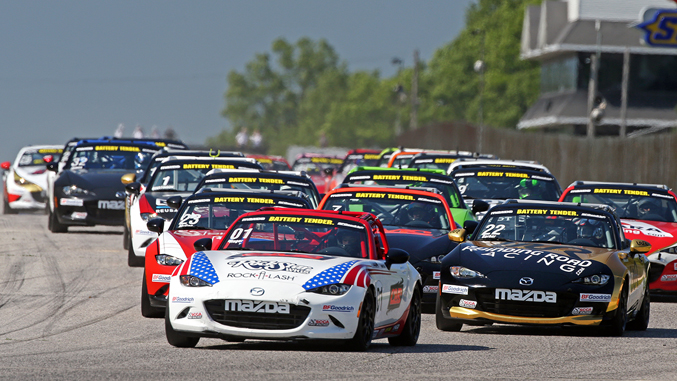 You’ve been participating in HPDE and track day events for years, and now you’ve decided to tackle wheel-to-wheel racing. And now… how do you prepare for this step? What should you expect?

I look at racing this way: there are three main areas that you have to learn.

If you add up all of the HPDE and track day events you’ve done, you’re likely pretty good at number one on the list: how to drive your car fast. Learning how to drive specific tracks is a moving target, as you move to new ones, and go back to the old ones you’ve driven in the past.

It’s this last area – racecraft – that takes time to adapt to.

Rather than just jump right into this huge topic (perhaps more than can be covered in just this article), let’s look at a few things you should consider and be prepared for as you transition to wheel-to-wheel racing.

To begin, consider the risk levels. Driving by yourself on a track is somewhat less risky than racing other drivers, if only because there’s a factor that you can’t control: the decisions of others. As you make the transition, you need to accept this extra risk. Now, this increase is risk is very much dependent on where you race, what the other drivers are like, the type of car you’re racing, and how competitive you want to be. But it is there and you need to be aware of it and accept it – or not.

When you start out, you may run close to the back of the pack (don’t be surprised by this, no matter how fast you think you already are). If there are enough cars in the class, you’ll have others just in front of you that you can chase and learn from. Once you’re running in the middle of the pack, then you can chase and learn from the top drivers. Of course, when you get towards the pointy end of the grid, the competition gets tougher, and you’ll continue to learn.

One thing most drivers learn is that the racing – the wheel-to-wheel racecraft – gets easier in some ways once you’re at the front of the pack. Towards the back of the pack, drivers tend to be less predictable, and less skilled (not always, as sometimes it’s a matter of how competitive their cars are). That makes them harder to race closely. But you learn from every driver you’ll ever race against, so don’t discount the value of this experience. All I’m saying is that as you move towards the very front you may actually find some of this easier.

Having said that, the drivers who run at the front are there for a reason. They’re fast, and they know how to race wheel-to-wheel.

Racing in a class where there are many cars, in my opinion, is best. Racing where you can come in 3rd place in a field of two cars(!!!), is not very satisfying – at least not for long. Sure, you’ll collect trophies, but for most drivers the lack of competition is a major downside, as they’d rather compete for the trophy instead of simply showing up to get it. More importantly, the more cars in the class, the more you’ll learn.

Race in a class where there are twenty or more cars and you’ll always have someone near your speed – either behind you or in front of you – to learn from. Whether you’re faster than everyone or not, you’ll learn even from those who are a little slower. You’ll see what other driver are doing, where they’re placing their cars, where they brake, shift, and accelerate. And you’ll try some of what these other drivers are doing and find out whether it helps or hurts your speed.

As part of your preparation, I recommend watching as much video as you can of the cars and races that you intend to compete in. Sure, you’ll learn something from simply watching their line and speed, but most important is how a race plays out. Just like any sport, there’s a flow to a race. Watching for this will help you prepare. Do drivers race hard from the drop of the green flag to the checkered? Do they pace themselves? Do they run hard at the beginning, but fade towards the end? Do they save their tires for the final few laps? How do they adapt to changing track conditions? All of these things can be learned from watching videos.

It’s also important to talk to drivers who are competing in the class you’re planning to race in. Most drivers will be happy to share some (but maybe not all) of their experience. Play to their egos, and let them know how much you appreciate their insights. Most of these drivers will not expect you to be much competition to them in the beginning, so they’re usually willing to help bring someone new (you) into their class.

Prior to your first race, do everything to be fully prepared.

Once you’re at the race event, make sure you can focus on what’s most important – your driving. If you have to do all the work on your car, that’s time and energy you’re not focusing on your driving. Get volunteers to come to the track with you – more than you think you need. The worst case scenario is they’ll spend time sitting around, enjoying the event, and sharing your experience with you. Best case, they can be changing tires, putting fuel in your car, or whatever, while you think about how you’re going to approach the next session on track.

As for the on-track sessions, remember that you learn more with every lap you drive. You’re better off qualifying last, but driving every lap, than you are trying for the pole and spinning off the track. Once you have more experience in racing, then you can take bigger chances to go after the pole. Same thing applies to the race – finish it. You’ll learn more that way than you will if you crash out half way through.

A race is really not that different from driving in a track day event. Your goal should be to put together as many of your best laps (not always the fastest, but consistently fast) as possible. One lap does not make a race. No one remembers who turned the fastest lap (except maybe your dog). Focus on your own performance. Let the results look after themselves. As you’re racing, keep that in mind: stay in the moment, and drive your car, your race.

Racecraft – the art and science of passing, being passed, managing race starts – is a whole topic in itself. But some basics are:

At the end of your first race event, you want people around you to think, “He/she is a smart driver. Fast, consistent, and someone that I’d be comfortable racing wheel-to-wheel against.”

I strongly recommend doing mental imagery of how you’d perform throughout the event – practice, qualifying and race. Not on the results of any of those, but on how you want to perform. See, feel, and hear yourself driving the car in way that will end up with the results you want. But forget the results. If you drive smart, consistent, and fast (but not too fast), that’s your performance. And that’s what will dictate your performance and results (not dreaming about collecting a trophy).

Imagine what it would be like to go through your first real race event and know that you performed at your best. You prepared well; you focused on your driving; you learned a ton; you raced smart, consistent and fast; and you had fun. If that happened, wouldn’t you be satisfied with whatever result you got?

The Guide to Road Racing, Part 11: Track Night in America

Speed Secrets: From HPDE to Racing