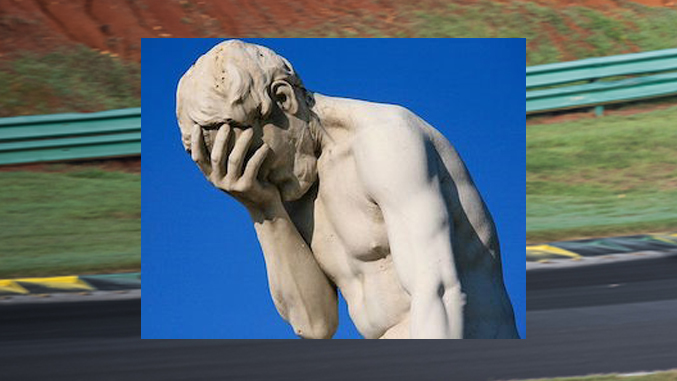 When was the last time your emotions crept into your driving performance? If you’re like most drivers, that’s an easy question to answer: "Almost always."

Ian Korf, who has written a fantastic book, You Suck At Racing, is taking on a tough topic this week: managing your emotions and specifically, shame. I know what you’re thinking, "Wow, that’s heady stuff," but tell me honestly that you’ve never felt it when at the track.

Ian, who is a Professor at the University of California Davis who specializes in bioinformatics and genomics, has a rather unique perspective on driving. He races in the LeMons series, coaches at Hooked on Driving events, and generally thinks a lot about driving (I suspect when he should be doing other things…).

“Men walk this tightrope where any sign of weakness elicits shame, and so they’re afraid to make themselves vulnerable for fear of looking weak.” — Brene Brown

Some of the most difficult hurdles we face in life are psychological. This is especially true of learning to drive a racecar. Racing forces us to confront our personal inadequacies, and often in public. Nobody likes to feel embarrassment, guilt, or shame. How one reacts to these intense emotions is important because it affects how well we drive and how much we enjoy the sport. So, let’s start by defining some terms.

Embarrassment is a feeling of unwanted public attention. There doesn’t have to be any fault or personal shortcomings. Someone could simply open the bathroom stall while you’re doing your business and you would feel embarrassment (and so would they, I hope). At the track, embarrassment is often associated with some kind of driving snafu. I recall forgetting to set my hood pins one session. It was a little embarrassing getting towed back to the pit because of that. But time has a way of turning embarrassment into comedy, and now I love telling the story.

Guilt is a feeling of remorse for an action. For example, after several unsuccessful attempts at passing the car in front of you, you decide to take a chance by braking later and sneaking up the inside (which you know isn’t a great idea). Your brakes lock up and you punt the car in front of you. It slides off track and smashes into a tire barrier, ejecting a cloud of dirt when it hits. You feel guilty that your impatience just caused someone personal and financial injury. The emotional pain is a regret about the action. You wish you could have a do-over. Feeling guilty is completely normal and a good thing. It shows you have a moral compass pointed in the right direction. Nobody wants to race with someone who happily punts other drivers.

Shame is a feeling of remorse about your self-worth as a person. It’s not tied to an action. For example, an old buddy of yours is visiting you for the first time in a decade. As car enthusiasts, you decide it would be fun to do a track day together. You’re having a great time and you put down the best lap of your life. You decide to swap cars because your friend’s car is AWD and that’s new to you. After a fun lap, you return to your car to find your lap timer reporting that your friend has just beaten your best lap time by two seconds on a track he hardly knows. The emotional pain you feel is about your own self-worth. You want to run and hide.

So what can you do about these negative emotions? It depends on the type. Embarrassment will be funny later. Yes, it’s painful in the moment, but it will pass, and it may turn into a great story. Something you feel guilty about might never be funny. That’s okay, some lessons are painful. Learn from the experience and become a better driver. Shame? That’s much more difficult.

One way to deal with shame is to become a narcissist. Okay – time for another definition. Narcissism is an exaggerated feeling of self-importance. You’re the center of the universe, you’re awesome, and nobody can tell you otherwise. When confronted with your sub-optimal lap times, it’s never your fault. It’s the car or the track or the weather. Alternatively, it’s a difference in the racing line, which if you knew it, you could drive just as fast as anyone. And why are they keeping that from you? Jerks.

Narcissists protect themselves from shame by denying their inadequacies. Why do they do this? Because to admit that they suck at racing will require them to feel deep shame. It feels crippling to confront your own shortcomings, and doubly so when you’ve built yourself up to be some kind of minor deity. When narcissists crash to earth, it’s never pretty, and the shockwave may cause lasting collateral damage.

Another way to deal with shame is to embrace your humanity. Show your faults to the World and declare that you’re a work in progress. Not only will you make more friends, but you’ll also be able to learn more. If you’re trying to protect yourself from shame, you’re never going to look at your driving objectively. How can you look at the telemetry data that shows you’re at 1/4 throttle at the kink when you’ve told everyone you’re at full throttle? If you want to improve, you’re going to have to compare yourself to people who drive better than you. If you don’t want to get better, why are you even reading this?

I don’t generally like talking about sex, especially juxtaposed to cars, but I’m going to do so here to illustrate a point. The stereotypical alpha-male thinks he’s the World’s Best Driver and Lover. Confidence is sexy, right? You know what’s more confident and sexy than an alpha-male who proclaims his superiority at every turn? Teamwork. Let me demonstrate that with a bar scene (please excuse the stereotyped heteronormative situation).

Guy: "How about we go back to my place? I will literally rock your world."

Guy: "That’s because the other guys weren’t me."

Guy: "How about we go back to my place?"

Guy: "Me neither. Want to figure it out together?"

We’re all protecting ourselves from shame at one time or another. And it’s holding us back from becoming better drivers. That’s criminal if you ask me. Driving is too important to be limited by fears and insecurities. As a coach, I hear a lot of things that indicate overly-protective personalities. Let’s look at a few examples and what goes through my head when I hear them. Note that I generally don’t confront people about their insecurities on a track day. They’re there to have fun and learn, in that order. It’s not my job to tear down their walls. But I may make some suggestions at the end of the day that I hope will start them on the path to realistic self-evaluation.

•               "No, you can’t be my passenger because I’m trying to work on something solo." And discussing your technique with a driving coach wouldn’t be useful?

If you want to get better at driving, check your ego at the door. Nobody learns less than the know-it-all. Stop needlessly protecting yourself from shame. The way forward is by asking for help. It won’t make you less of a person. It’s quite the opposite. Lap times are far more important than posturing. Confidence is only sexy on the surface. Meet trouble more than halfway by recognizing and addressing your faults. Sure, it may be a little painful, but most things worth doing are difficult.

“The truth will set you free, but first it will piss you off.”– Gloria Steinem

As long as we’re feeling shameless, I might as well make a shameless plug for my book. I’m not Ross Bentley, and it’s not Ultimate Speed Secrets, but if you want a safety-minded book for the novice racer, I would be honored if you read You Suck at Racing: a Crash Course for the Novice Driver. You can find it at Amazon.com

In Thanksgiving For Racing And Racers