Speed Secrets: 5 Ways to Use Video to Improve Your Driving 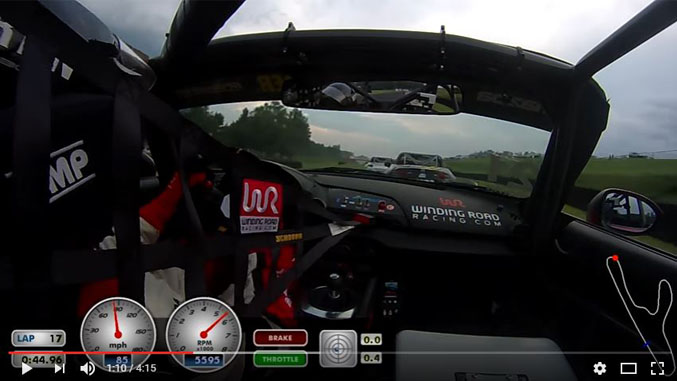 A goal for every issue of Speed Secrets Weekly is to provide useful information in an easy-to-use format. And do we ever have some good stuff this week in an article from Peter Krause.

A car on track without a video camera is a rare exception these days. But short of using the video to impress (or not!) friends and family, these videos are not used enough for really digging into one's driving to find improvements. And that's where Peter's article comes in – it's unique (I've never seen this type of information shared before), it provides a great process, and it's easy-to-use.

Grab some of your videos and use Peter's article as a guide to help you improve your driving. And then thank Peter. – Ross

In the field of motorsport, there are many good personal and technical resources available to drivers, at whatever their level and wherever the venue – HPDE or professional formula, GT and sports car racing, and EVERYTHING in between. The key is efficient, repeatable, and expedient marshaling of these resources to chart a very limited, highly-detailed plan to execute fundamental skills, the BEST YOU CAN. The optimal way forward can often rely on a methodology that starts with a detailed examination of WHAT YOU ARE DOING IN THE CAR NOW.

These days, technology from GoPro cameras, to Harry's Lap Timer, to manufacturer-developed systems and software like GM's Performance Data Recorder (PDR), BMW's M-App and Porsche's Precision Track App and serious, more powerful tools from AiM, VBOX, MoTeC, Race-Keeper and others can provide terrific information YOU can use to review your performance. Drivers who are starting out or, more likely, are at the point of being "stuck" at a particular performance plateau, NEED to KNOW what they're doing so that they can figure out WHAT needs to be done better.

Another topic, worthy of a separate Speed Secrets Weekly, is how we can USE the reconciliation of our remembrance of what we DID in the car with what we actually SEE happened in our video and data record. Our minds are very powerful things. We remember doing what we would LIKE TO have happened, rather that what DID happen….

The whole driving experience, at whatever level, quickly can become muddled and unproductive WITHOUT a detailed plan. With the explosive growth in the capability and power of these technology tools, it's also possible to drown in a sea of information that doesn't help to cut directly to the chase, which is what YOU can do, to DO BETTER.

So let's outline a simple plan to guide your formation of simple, achievable objectives for the next session, assuming you have some sort of video tools to record or "log" the information from your track performance for further review. We'll just focus on raw video and instrumented, "intelligent" video review in this week's article.

The key is not to look at a lot of measures topically, but to look at a few measures over and over again, so you can identify trends, as well as where you are consistent, and where you are not. Make sure you don't limit your review to your best lap, which may be an outlier! Look at the fastest three laps to get a more accurate and representative view. In no particular order, here are three groups and a total of five optimal (or not) trends to look for in your own information, without comparing yourself to another driver, who is often just another variable. <grin>

So much visual (and even limited sensory) information is contained in a simple video, MUCH more so in the latest crop of "intelligent" video, loaded with speed, g's and sometimes throttle, brake, and other driver input measures embedded ON the video. When time is of the essence (and when is it NOT, at the track?), video IS the go-to.

Pull the storage card at the end of a session, write down in a notebook the course conditions, any notes on the car, and not only the three things you had the most challenge executing, but also the three things you think you did well! THEN, fire up the laptop, insert the card, find and review your quick lap, then review your next quickest lap. Note speed (allowing for lag and inaccuracy in less expensive apps), g's, throttle, and brake if you have them, turn the volume up to listen. Critically analyze at least these five areas below, then pick the most glaring opportunities for improvement, NOT more than TWO, and write those down in your notebook as objectives for the next session….

1) Make sure you are using the entire width of the road, unless there is a compelling reason not to do so. Make sure your car placement at the apex (as well as the duration against that apex area, in longer corners) is consistent and accurate. If not, pick the corner(s) with the most inconsistency, and resolve to be accurate at those particular corners next session. Then, review to see if you WERE better.

2) Make sure you're using the same lowest gear for corners of similar speed range. If you're going through one or more of the slower corners in a HIGHER (numerically) gear than others that you traverse in the same speed range, ask why. You may be able to either shift up a gear in the other slow corners, but more likely, you'll want to maximize accelerative consistency and efficiency, making sure that you are using the same lower gear in all corners with a similar speed range. To KNOW that you're in too low a gear, just make sure you're not out of revs before track out. Always leave yourself room for improvement and NEVER take "paddock advice" as the de facto truth for gear selection until you've been able to confirm it.

3) LISTEN to the sound of the engine, the note rising under acceleration and falling slowly (coasting) and quickly (braking). On acceleration, make sure the note rises at a steady rate UP TO the point where it begins to go down, continuing to accelerate to that point and not being "lazy," in anticipation of slowing down. This typically shows up as coasting, neither gaining nor losing speed, hence the engine note becomes steady. It should not. Gas, until you brake. When you decide to brake, BRAKE! The engine note should drop quickly and at a uniform rate. If not, make it so.

4) If possible, review your actions in the car by having the camera mounted behind you and high enough (eye-level) to be useful. Not only do you want to see the front edges of the car in relation to the edge of the road, but you want to see where YOU are looking by observing your helmet, and WHEN this occurs in the cornering phase. LOOK where you want to go, but keep your eyes moving. Make sure both hands are on the wheel, except for when you shift a non-paddle- equipped or automatic transmission-equipped car. Sometimes, a simple review of how YOU interact with the controls of the car can offer insight on ergonomic or technical execution challenges that, if addressed, can make it easier to drive the car quickly without thinking about it.

5) If you are fortunate enough to have driver control inputs recorded onto the video, get into the habit of "counting off" the time in seconds between off-brake and on-throttle. "One-thousand, two-thousand, three-thousand" will drill in (excruciatingly well), a delay that is costing valuable time. If there's little downtime between those inputs, then begin counting off between initial throttle application and WOT (wide open throttle). Do what you can to shorten the count, and MAKE SURE that the throttle progression doesn't outpace the ability to keep the car on the desired trajectory. An example would be if, anywhere after the beginning of throttle progression, there is a regression, or lift (indicating a correction), the geometry is NOT correct. If the throttle progression is not smooth, brisk, and nearly uninterrupted, FIX it! The throttle bar, in those systems so equipped, is a window into the confident (or not) driver's state of mind. Very accurate, very telling, and a key measure to gauge your performance.

These technology tools offer an unerring, objective, and non-judgmental way to show you the eighty percent you're doing well, and exposing sometimes in a glaring, obvious way, the twenty percent you can find the most improvement. To know where you want to go, you must know where you've been….