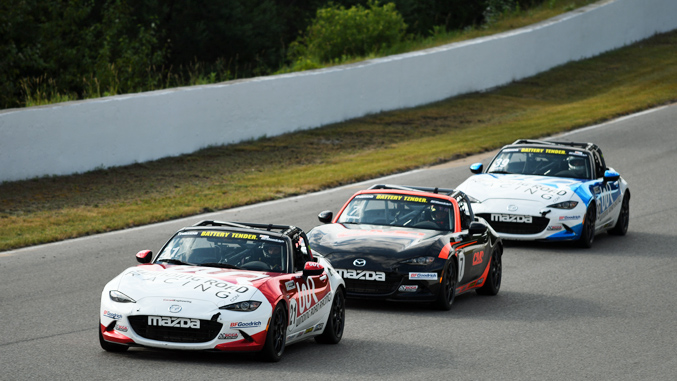 In the past, I’ve looked at what you as a driver can do to shave a little off your best lap time. Now, let's take a look at three specific plans (there are dozens) to go faster.

1.  The Late Braker: For many drivers this is the most common, and most overused, technique. They think that by going a little deeper into the corner before braking, they will gain a lot by maintaining the straightaway speed longer. It's only natural to think this way. After all, when running side-by-side with another driver, whenever you brake later you end up in front.

In reality, though, by braking later most drivers brake harder than before, meaning the car enters the turn at the same speed as before. Just braking later, while not carrying more speed into the corner, will gain you very little. All it does is maintain your top speed for a few feet longer on the straight. This is okay for picking up a few hundredths of a second, but not much more. Carrying more speed into the corner (as long as you can still make the car turn-in and accelerate through the turn) will make a much bigger improvement.

Consider this. On an average road racing circuit, if you can enter each corner even one MPH faster, then you will have made up to half a second improvement in your lap time. I’ve actually calculated that using a computer lap simulation program for Road Atlanta, Mosport and other tracks, and confirmed it with my own data acquisition information. Who would you sell to gain half a second?!

The big problem with late braking is that you end up spending too much concentration simply on braking, when some should really be spent on more important things. In fact, quite often you've focused so much on the braking that you overreact and lock-up the brakes. Usually, you've left your braking so late that all you're doing is thinking about surviving, and not about braking correctly and what you have to do when finished braking.

Have you done this? In trying to go faster, you think about braking later for Turn 1. As you approach Turn #1, you think, “wait, wait, wait… before braking.” You sail past your normal braking point… waiting, waiting… NOW… stand on the brakes! Of course, in all the panic and pressure of trying to survive, you either locked up the brakes or ran wide in the turn, right?

2.  The Light Braker: This is usually the first step in the right direction in working to go faster. You brake at the same point as before, but with a slightly lighter brake application. This means you will carry more speed into the corner (remember, if you can carry just one extra MPH, it's going to lead to a great reduction in lap time).

This is also a lot easier. As you approach Turn 1, just think, “relax… just brake a little lighter… carry one MPH more into the turn.” Guaranteed, you’ll be much calmer.

3.  The Late, Correct Braker: This is the real goal. You brake later than previously, but at the original (threshold) braking rate. So now you gain by maintaining your top speed on the straight longer (small gain), as well as carrying more speed into the corner (big gain). As well, you haven't spent all your concentration on just braking – you are thinking about corner entry. That's how to go faster!

So, the next time another driver brags about how late they brake for Turn 1, just smile and go on your way – the faster way.