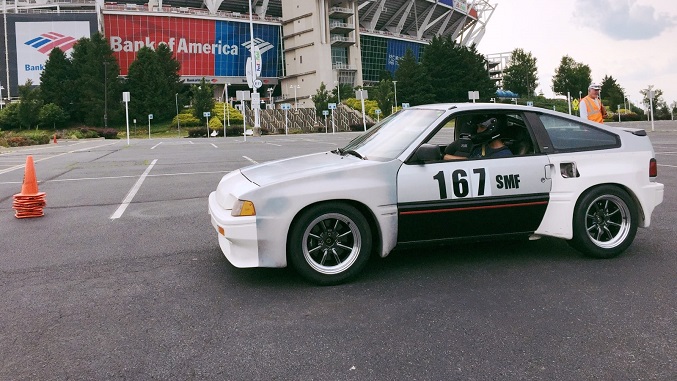 Paul Darling is a top-5 contender, a fairly humble guy, and comes from the very important world of SCCA F&C (Flagging and Communications); he also neglects to mention he just won the inaugural SCCA Online Championship earlier this year (read more about that at Racer.com).

My name is Paul Darling and I’m from Michigan.

I am working as an engineer for an automotive company.

The prize is always enticing, but my main reason was for close competition. I was curious to see how I would stack up against some of the best who I saw on the entry list.

Without a track capable car, I started volunteering as a flagger in 2013. It’s a great way to get involved at the track and sometimes the best seat in the house!

I’ve had the good fortune of having generous friends who allow me to co-drive, so I probably have around 2.5 cumulative seasons of autocross over the last 5 years or so.

Absolutely. I think virtual motorsports games can get someone started in learning how to drive at the limit and race other cars on track. I’ve only done one track day at Summit, but I definitely felt that iRacing gave me a leg up in getting up to speed since I already knew the track.

I think we have all seen racing esports on the rise in terms of relevance to real world racing. Many real racing teams now have an esports presence, and the most interesting aspect to me, is seeing current F1 drivers stream on Twitch.

If I’m not playing iRacing then I’m usually playing Rocket League. I used to be a ‘gamer’ on console, but once I started iRacing most of the other games kind of fell away.

I consider it a simulator and training tool, but it can still be called a game. I don’t usually get caught up in the distinction.

I started on iRacing in 2012 with several years of a break for college.

It is definitely at the level of a time-intensive hobby.

Usually yes, although I’ve backed off recently to just do Spec MX-5 and Champion Motorsports.

I like any endurance series and prefer to drive GTE.

Probably around 10 hours a week if prepping for a competitive league race or endurance series weekend.

Barring a disaster for the leaders, next to nil. I am usually slightly off the pace required for a podium, so my chances are not high.

I don’t think I’ve got anything interesting.

Speed Secrets: How to Win the Race Start