Features, Racing I By Winding Road Staff I December 12, 2018 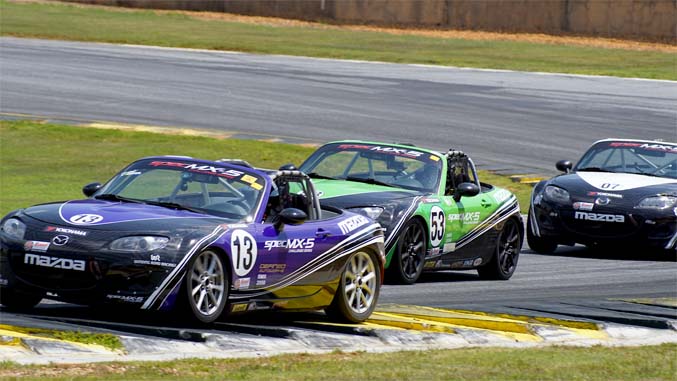 T4 Cars May Compete in Championship Series or Individual Events

The Spec MX-5 Challenge provides the pro step between the ultra-popular Spec Miata club classes and Battery Tender Global MX-5 Cup. “We see the NC-generation MX-5 as ideal for driver development through road racing”, said Todd Lamb, Spec MX-5 Series co-director. “The car provides a relatively low-cost platform, which helps to ensure a large and competitive group of drivers, including drivers moving up from karting and Spec Miata. In 2018, Spec MX-5 Challenge drivers showed just how dynamic racing can be in these cars, with close fields, lots of passing and many winners decided by tenths or hundredths of a second,” he observed.

Technically, current SCCA T4 cars and the Spec MX-5 Challenge cars are very similar. With the vision of having over 100 cars racing in Spec MX-5 Challenge, the series decided to welcome SCCA T4 cars with minor modifications for 2019. “The series is working with Mazda, SCCA, and NASA to build a common rule set for NC MX-5s for the future, and we see 2019 participation by T4 cars to be an important step toward future major club classes and a related pro series,” said Tom Martin, Spec MX-5 series co-director.

The second level is running the full Spec MX-5 Challenge season, either East or West. Drivers can run their T4 cars for the regular season. If they qualify, based on points, for an invitation to the national championship, they will be able to run for over $100,000 in prizes, using one of the series’ Spec MX-5 Challenge race cars.

Spec MX-5 will provide a list of the Balance of Performance requirements to enable T4 cars to qualify for Spec MX-5 Challenge events. This list of performance modifications includes removal of top, ballast to Spec MX-5 T4 weight and install series-approved tires. Lamb said, “We will be testing T4 and Spec MX-5 cars pre-season to determine the exact details of the BOP, but we will make the conversion easy enough to allow drivers to do the conversion during a race weekend.” Spec MX-5 officials will perform a tech procedure on each T4 car. T4 cars must also be set up with reference to Spec MX-5 rules, which limit setup factors such as ride height and camber. More information is available on the series' SCCA T4 FAQ.

Mazda will provide incentives for T4 drivers who are running individual events. This contingency money will be awarded race-by-race but will only apply to drivers competing in up to three events during the season and not registered with Spec MX-5 Challenge as a full-season competitor. “Drivers — using either T4 or Spec MX-5 cars for the full regular season — may qualify to compete for the national championship prizes running in identically-prepared Spec MX-5 cars,” Martin said.

Going For Glory One Hour At A Time

Carter Wins $100k Scholarship, So Can You