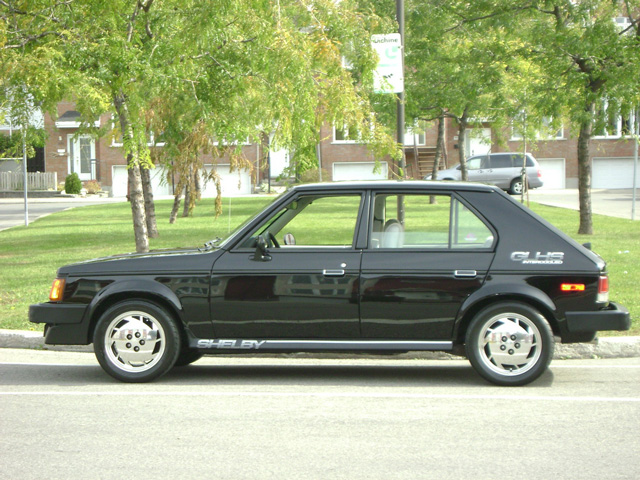 In the pursuit of finding cars worth keeping, there’s not always a clear connection between pedigree, price and performance. Sometimes, cars that people expect to be good turn out to be rubbish, despite their ancestry. And sometimes, you come across performance heroes in the most unlikely of places.

25 years ago, while Ford and GM were dishing out V-8 Mustang and Camaro pony cars, Chrysler had a notion to compete with the four-cylinder import invasion. Readers may recall names like Omni, Daytona, Charger, and Shadow, but it’s the lesser-known variants of these cars—GLH, IROC, CSX, and yes, Shelby—that stand out among the ranks, thanks to the now-infamous Chrysler 2.2 liter turbo four-cylinder variants that powered these unsung 1980’s performance machines.

The lineage for these cars…well that’s not really something worth mentioning unless you’re into platform shoes and dry toast. The important date to remember here is 1984, when the first 2.2 turbo was offered in the brand new Dodge Daytona sports coupe, called the Turbo Z. Meanwhile, a little-known performance gearhead by the name of Carroll Shelby took an interest in the compact Dodge Omni and its two-door variant, the Charger. The result was the Shelby Charger and Omni GLH, the affectionate (and official) acronym for Goes Like Hell thanks to a boosted 146 horsepower. Shelby upped the ante in 1986 with the Omni GLHS model, bumping horsepower to 175 and catapulting the little hatchback well beyond its direct competition and into the realm of higher-end performance machines of the day. Quarter-mile times in the mid-14 second range were common, and suspension tweaks gave the car a cornering bite approaching .9g. 1986 was the last year for the Omni GLH, with only 500 of the GLHS cars—all of them black—being produced. The GLHS powertrain then found its way into the Shelby Charger GLHS, which also received adjustable Koni suspension for its final year of production in 1987. As with the Omni, the Charger GLHS was only available in black and built in limited numbers; only 1000 examples hit the road.

The Dodge/Shelby collaboration continued with the introduction of the Dodge Shadow in 1987. Shelby nabbed 2250 Shadows between 1987 and 1989 to create the Shelby CSX, featuring suspension tweaks, obligatory body/stripe packages and of course, the 2.2 turbo from the GLHS.

Meanwhile, Dodge and Shelby also had a working relationship on the Daytona. Depending on the model year, these cars were either called Shelby Z, C/S or simply Shelby Daytona, and they featured—wait for it—the same 2.2 turbo found in the Omni/Charger/Shadow until the advent of the Daytona IROC in 1991. 1992 saw the ultimate evolution of the 2.2 turbo—now producing a full 224 horsepower—shredding tires on IROC Daytonas as well as the limited-run Dodge Spirit R/T sport sedan.

A Motley Crue of cars to be sure, but with a low price of admission and wide-spread use of the 2.2 turbo in a slew of other Chrysler vehicles, locating a turbo Dodge from the 80s is about as difficult as watching TV, and tweaking them for more power isn’t much harder. Finding the four models mentioned above could take a bit more work, but they offer a unique combination of quirkiness, rarity, performance, and old-fashioned, jaw-dropping sleeper tomfoolery worthy of Keepers status.

Next issue, we’ll go in-depth on what to look for in the many variants of the Chrysler 2.2 turbo, and the cars that make the most of it.