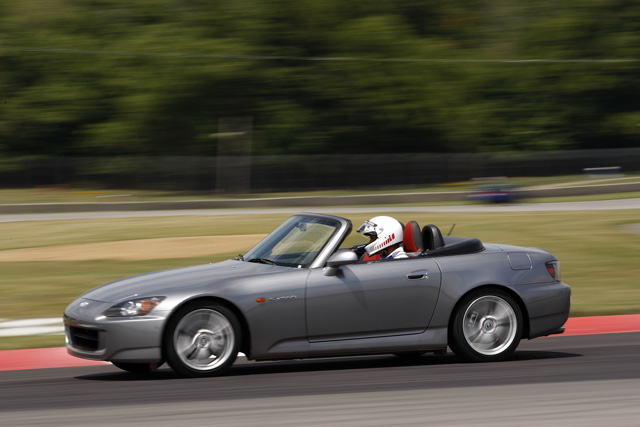 In the broad realm of performance motoring, there are essentially three classifications of enthusiasts: Those who seek pure power, those who seek pure finesse, and those who seek a balance of the two. For those seeking finesse, top-down sports motoring doesn’t get much better than the Honda S2000, and while the high-revving, 240 horsepower four banger under hood won’t satisfy the power hungry, it does propel the S2000 with enough punch to get an inexperienced driver into trouble, and boy does it sound good doing it.

The S2000 lineage dates back to the mid-60s and the diminutive S500, a car designed to compete with the likes of MG, Triumph and other British sports car manufacturers of the day. At only 531cc, the S500’s tiny four cylinder matched the British competition for power despite being half the size, producing 44 horsepower thanks to such advanced features as double overhead camshafts and a roller-bearing crankshaft. Those features allowed the engine to spin all the way to 9500 rpm, thus beginning Honda’s reputation for high-output, high-rpm, small-displacement powerplants. The S500 evolved through the 60s to become the S600 and ultimately the S800, which retained the basic design but saw an increase in engine displacement to 791cc, yielding an impressive 70 horsepower.

The original S-cars of the 60s never reached U.S. shores, but 35 years later the S2000 introduced itself to Americana and it’s been on the top of the sports car graces ever since. In a world of complex, multi-level techno-gadgetry, the S2000 woos drivers the old fashioned way thanks to a traditional front-engine, rear-drive layout, perfect 50/50 weight distribution, a proper, sweet-shifting six-speed manual transmission (no automatic or paddle-shift here), independent suspension tuned to handle corners without a jarring ride, conservatively-handsome lines, and a stirring soundtrack from its high-output, F1-inspired, naturally-aspirated engine to help remind occupants that this isn’t some run-of-the-mill roadster. And despite a nine-year relationship with minimal changes, the S2000 remains a stirring experience for the soul, rewarding drivers with maximum involvement in the piloting process. Around this office, we love cars that involve the driver, and we love the S2000.

Sadly, June 2009 marks the end of the road for this roadster, with no plans from Honda for a replacement. Earlier this year, the company scrapped all its future performance aspirations—including the proposed S2000 successor—choosing instead to focus on green machines like the FCX Clarity. Honda performance will live on however; well over 100,000 S2000s found homes since the car debuted in 2000, which isn’t bad for a vehicle initially intended to be a limited-run model for Honda’s 50th birthday party. Here’s hoping we don’t have to wait another 35 years for the next-generation sports car legend, but if it can capture the essence of motoring finesse like the S2000 did, the wait will be worth it.

Return in the coming days for more Keepers goodness, including S2000 buyer’s tips and where the S2000 faithful like to hang out.