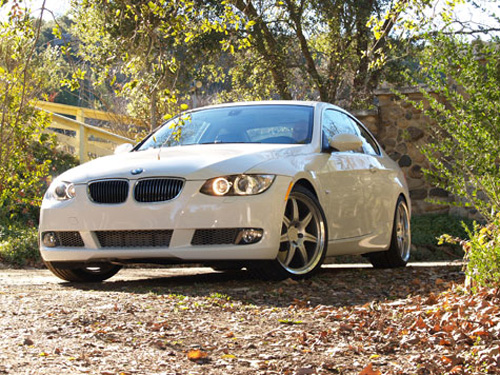 Taking the fabulous BMW 335i and trying to make it better than an M3 is a tempting but difficult exercise. Not only is the M3 a very good car, so is the 335i. If anyone has a chance to pull this off, it would be Dinan, the long-standing mega tuners of BMWs in the U.S.

Dinan has something of a unique position among American BMW tuners. That’s because its products are sold and installed by many BMW dealers (and tuning shops) across the country. Local sales and service is a big deal, especially if you don’t live in LA, Chicago, New York, or some such place where an experienced tuner resides. On top of that, Dinan products match the BMW factory warranty, so the whole issue of voiding the warranty and arguing with the dealer is moot. Buying a Dinan tuned car isn’t much different from buying an AMG Mercedes (or an M car).

To check out Dinan’s handiwork, we drove a Dinan S1 335i coupe. Dinan’s nomenclature is a little confusing, since the S1 package consists largely of Dinan Stage 2 software and Stage 2 suspension. The software and accompanying oil cooler raise the twin-turbo’s output by 84 horsepower to 384, and lift torque by 121 pound-feet to 421. That’s close to the M3’s 414 horsepower, but the Dinan completely crushes the M3’s paltry 295 pound-feet torque spec.

The cost of all this is a pretty reasonable $7558. Before we get too excited, we should put that in the context of an M3. For comparison purposes, a base 2009 M3 coupe cost $58,675. A Dinan S1 335i coupe would cost $52,133 with essentially the same options. That’s about a 10 percent savings, which isn’t going to change the world but isn’t bad either. There may be a false economy at work here, since some of the Dinan savings may ultimately be lost in depreciation, but we couldn’t find enough data to be able to tell.

So, that leaves us with the question of whether you might actually have a better car in the Dinan than you would with the stock 335i or the M3?

To shed some light on this, we borrowed a brand new S1 from a cooperative owner and did one of our standard road test loops in it. First, let’s consider a comparison with the 335i. On the street, the Dinan S1 is very much like a 335i, only better. The Dinan feels like it has less turbo lag than the 335i. 335i owners will know that there is often a very short but perceptible delay when you get into the throttle, especially between 2000 and 3500 rpm; with the Dinan, this delay is lowered a tad. At lower rpm (below 3500), the torque difference isn’t noticeable without a side-by-side comparison. But above that level the Dinan is a rocket. The 335i is a fast car with excellent mid-range power, so that’s an accomplishment. For some it might also be gilding the lily.

The other area where the Dinan S1 feels different is in the suspension tuning. On the street differences are subtle, but the S1 feels tighter than a 335i on turn initiation, with a bit more damping. Ride quality on broken pavement is a little harsher, but the 335i isn’t very harsh so this is a minor sacrifice. The differences here aren’t huge, and the Dinan suspension retains the BMW ride/handling balance, simply tilting it slightly.

When compared with an M3, we actually think the Dinan has two advantages on the street. The mid-range thrust of the Dinan engine feels much more potent than an M3. Similarly, the suspension feels a little more locked down than the M3’s somewhat soft setup. But, and this is an important caveat, we didn’t have the Dinan on a track. The M3 is an amazingly balanced car with a fabulous motor at high revs. It is more impressive for track duty than typical street driving. The Dinan might be pretty impressive there as well, of course.

So, we very much liked the Dinan S1. It retains almost all of the 335i’s strengths while adding noticeable and pleasingly subtle benefits in punch and handling feel.

Back To School: We Preview Aston Martin’s Performance Driving Course