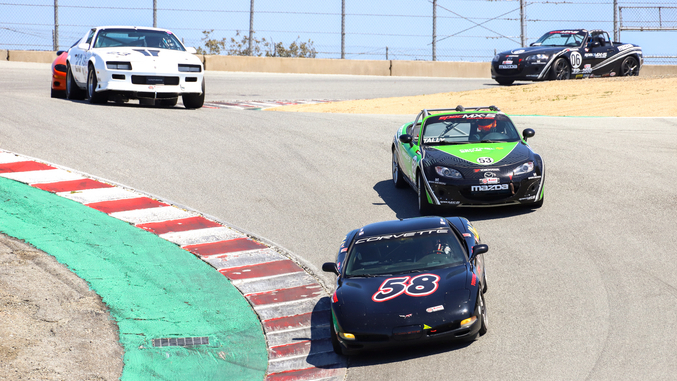 The higher a car's polar moment of inertia, the earlier and more gently you need to turn in. There's a phrase that should get you thinking!

There comes a time when you, the driver, need to adapt, and maybe even make up for a car that doesn't do what you want. Yes, there's a theoretically perfect line and method of turning into a corner, but we rarely drive perfect cars! If your car's weight is hanging way out the front (i.e., a front-wheel-drive car with the engine sitting far forward), for example, you may have to turn in a little earlier to make up for its lack of crisp turn-in ability. If you're driving a rear-engine car like a Porsche 911, that may change the exact point where you turn in, too. Cars with weight concentrated in the middle (with a lower polar moment of inertia) tend to change direction more quickly than cars with the weight hanging out the front or rear, which typically allows you to turn in exactly where you want; cars with weight out at the far ends of the chassis tend to require anticipating where it will eventually change direction.

Imagine a dumbbell with its weights at the very extreme ends of the bar, so they're about three feet apart. Now imagine holding that dumbbell above your head, and turning it in one direction, back the other direction, and then to the other again. Each time you stop it from moving in one direction and make it go the other way, it takes a lot of effort. But imagine if you were to move those weights in close to the center of the bar, to just on either side of your hand. In fact, now the weights are only a matter of a few inches apart, with just your hand in between. Turn the bar from one direction to the other again. Notice how much less effort it takes to change direction? The same is true with a car. The more the mass of the car is centered in its middle, the easier it is to make it change direction, say, from going straight to turning into a corner. That is why some cars require a different technique or turn-in point – because their polar moment of inertia is different.

And that's why we need to adapt our driving technique to the different cars we drive. Which is fun!

Practice adapting to the car's handling characteristics by adjusting your brake release, your turn-in point and speed, your throttle application, and how quickly and crisply you turn the steering wheel. You’ll be on the road to mastering any car you drive.