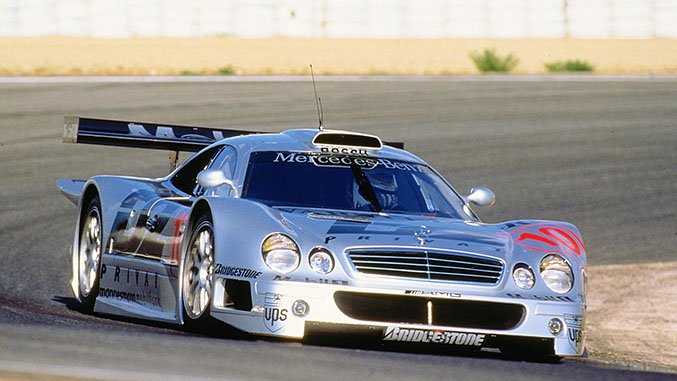 Photos courtesy of Mercedes-Benz and AutoWP
Mercedes-Benz won the Deutsche Tourenwagen Meisterschaft’s (DTM) manufacturers’ championship several times during the first half of the 1990s. However, the Stuttgart-based automaker faced the unenviable prospect of racing against itself after Alfa Romeo and Opel, Mercedes’ main rivals, pulled out of the series in the wake of questionable choices made by the FIA.  DTM was canceled altogether after the 1996 season, leaving Mercedes without a major presence in motorsport.
Mercedes was eager to keep racing so it ambitiously decided to take on Porsche and Ferrari in the GT Championship series that was launched in 1997. Working closely with AMG, the company’s engineers reportedly designed the CLK-GTR in just 128 days during the winter of 1996/1997.

The CLK-GTR represented a milestone in Mercedes’ illustrious racing history because it was the company’s first mid-engined racer.
Visually, the CLK-GTR borrowed a handful of styling cues such as its radiator grille, its headlights and its tail lamps from the CLK coupe that was launched in 1997 but the similarities were only skin deep.

The GTR featured a body made entirely out of carbon fiber and it was powered by a naturally-aspirated 6.0-liter V12 engine that was mounted directly behind the passenger compartment. Linked to a six-speed sequential gearbox, the 12-cylinder made 591 horsepower at 7,000 rpm and 516 lb-ft. of torque at 3,900 rpm, enough to send the roughly 2,200-pound GTR to a top speed of 205 mph.
FIA regulations dictated that the cars built for the GT Championship couldn’t be equipped with electronic driving aids such as ABS brakes, acceleration slip control (ASR) or an active suspension. Consequently, the only electronics found in the CLK-GTR were used to manage engine-related components such as the fuel-injection system.

The CLK-GTR hit the track for the first time on April 13th, 1997, at the Hockenheimring in Germany but its performance was dismal at best due to a number of mechanical issues. Mercedes quickly ironed out the kinks and the GTR won its first race at the famous Nürburgring on June 29th. The team won five more races that year including the Zeltweg 4 Hours, the Suzuka 1,000 km and the Donington 4 Hours, fending off fierce competition from the McLaren F1 GTR, the Porsche 911 GT1 and the Panoz Esperante GTR-1. Mercedes-AMG won the manufacturers’ championship in 1997 and Bernd Schneider took home the drivers’ title.
The CLK-GTR won the first two races of the 1998 season. Mercedes gradually replaced it by an updated version of the car called CLK-LM that was designed specifically to compete in the 24 Hours of Le Mans. The LM featured a number of visual modifications designed to obtain a better drag coefficient and it swapped the GTR’s V12 engine in favor of a 5.0-liter V8 that was better suited to endurance races.  An engine failure took it out of the 1998 edition of the 24 Hours after just 31 laps but it won every race that it entered in the GT Championship, allowing Mercedes-AMG to take home a second consecutive manufacturers’ title.

Mercedes hoped to win a third title but, against all odds, it found itself in the same situation that led to the demise of the original DTM series. All of the company’s rivals pulled out of the GT Championship, leaving Mercedes by itself in the GT1 category. The GT Championship was held again in 1999 but the top category was GT2.
To be allowed to race in the GT1 class, manufacturers had to sell at least 25 examples of each car to the general public. Mercedes kept its promise and introduced a street-legal version of the CLK-GTR in 1998. Built by H.W.A., a company that worked with AMG, the CLK-GTR was nearly identical to its race-going counterpart but its engine was upgraded to 6.9-liters, a move that bumped its output to 603 horsepower at 6,500 rpm and 539 lb-ft. of torque at 5,250 rpm. Power was sent to the rear wheels via a six-speed sequential gearbox controlled by big shift paddles mounted behind the steering wheel.

The street-legal GTR weighed about 3,100 pounds due to extra comfort-focused equipment but it nonetheless managed to hit 62 mph from a stop in 3.7 seconds and go on to a top speed of about 200 mph. Being able to drive a street-legal race car on the Autobahn came at a hefty price, and the CLK-GTR cost 3,074,000 German marks (roughly $1.7 million) when it went on sale, a figure that made it the world’s most expensive car at the time.
Five CLK-GTRs were roadsters and two were built to super sport specifications, meaning that they packed a 7.3-liter V12 that made north of 665 horsepower as well as a number of model-specific aerodynamic add-ons including a bigger rear wing and redesigned door mirrors.
Tags:
Le MansMercedes-Benz