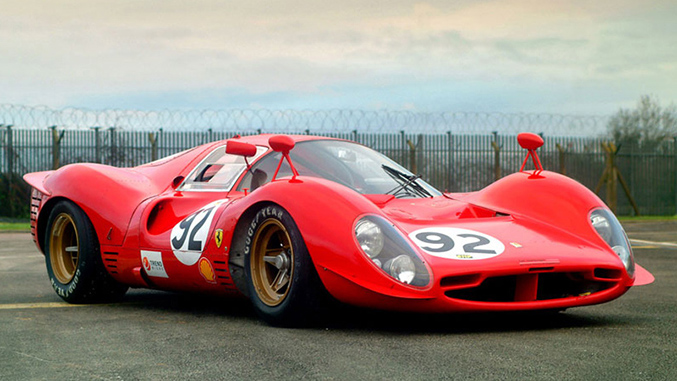 photos courtesy of Tim Scott Fluid Images and AutoWP
It is no secret that Ford tried to buy Ferrari in 1963.  Company founder Enzo Ferrari was initially in favor of the deal but he eventually grew tired of negotiating with Ford and canceled the tie-up altogether.  Furious, Henry Ford II vowed to develop a car capable of beating Ferrari at the 24 Hours of Le Mans.
While the Ford team was working overtime to design what would become the GT40, Ferrari was designing a new racer called 330 P that was based on the 275 P.  The 330 P was powered by a 4.0-liter mid-mounted V12 engine that made 370 horsepower, 50 more than the 275 P’s 3.3-liter 12-cylinder.  Power was sent to the rear wheels via a five-speed manual transmission.

The 330 P proved to be a remarkable race car that helped Ferrari capture the first three spots in the 1964 edition of the 24 Hours of Le Mans.  The three GT40s dropped out of the race one by one, showing Ford’s top brass the need to make drastic improvements to the car. Later, Ford asked Shelby to fine-tune the GT40 in order to transform it into a real Ferrari killer.
Ferrari didn’t rest on its laurels. The company introduced an evolution of the 330 P called 330 P2 in time for the 1965 season. It retained the P’s 4.0-liter V12 engine but its output was bumped to 410 horsepower thanks to the addition of dual overhead cams and new Weber carburetors.  Chassis modifications helped the 330 P2 handle better than the 330 P.

In spite of the extra power, the P2 wasn’t a massively successful car and it only managed to win a single race, the Nürburgring 1000 kilometers, in 1965.  Similarly, the GT40 took first place only once that year. The disappointing season accentuated the rivalry between Ford and Ferrari.
Ford continuously improved the GT40, which by 1966 was equipped with a 7.0-liter V8 engine. Ferrari kept up by introducing yet another evolution of the 330 called P3 that was designed with input from a former pilot named Piero Drogo. The P3 was a thoroughly updated version of the P2 that featured a stiffer tubular chassis, weight-saving fiberglass doors, a ZF-sourced five-speed manual transmission and a Lucas-designed fuel-injection system.  Although the 420-horsepower P3 was an impressive performer on paper, it suffered from reliability issues and it struggled in the 1966 season.

The full scope of the P3’s issues was painfully brought to light at the 1966 edition of the 24 Hours of Le Mans. Ford’s mk2 GT40 took the first three spots of the race, while the two 330 P3s entered in the event by Ferrari dropped out after 123 and 226 laps, respectively. Ford had finally beat Ferrari at the 24 Hours of Le Mans, and the team went on to win the 1966 World Sportscar Championship manufacturer’s title with 38 points. Ferrari took a close second with 36 points.
Hungry for revenge, Ferrari engineers pushed the V12’s output to 450 horsepower at 8,000 rpms by making a host of improvements like fitting new heads with three valves per cylinder – two on the intake side, one on the exhaust side. Keeping in line with the previous evolutions, the 1967 racer was christened 330 P4.

450 ponies was an impressive statistic considering the 330 P4 weighed just 1,746 pounds thanks in part to the widespread use of aluminum in its construction. To put that figure into perspective, the GT40’s V8 generated 485 horsepower but it had over 2,600 pounds to move, meaning the 330 boasted a much better power-to-weight ratio. Furthermore, Ferrari was confident it could beat its American rival because it believed the 330 handled better than the GT40.
Leaving nothing to chance, Ferrari developed a second racer for 1967 called P3/4. To build the P3/4, the team took P3 number 0846 and made several modifications to the tubular chassis in order to install the P4’s 450-horsepower drivetrain.

Both the 330 P3/4 and the 330 P4 made their track debut at the 1967 edition of the 24 Hours of Daytona. The P4 only managed to take second place but the P3/4 came in first and a 412 P finished third, marking a historic 1-2-3 finish for Ferrari on Ford’s home turf. In a way, this was Ferrari’s revenge for the humiliating defeat it endured at the previous year’s edition of Le Mans.
The P3/4 caught fire during the 1967 24 Hours of Le Mans and the P4 lost the race to the GT40, but Ferrari nonetheless went on to win the manufacturer’s title in 1967. However, the celebrations were cut short when the sanctioning body announced the engine displacement of cars competing in the World Sportscar Championship in 1968 would be capped to 3.0 liters in order to curb speed at Le Mans. Not pleased, Ferrari boycotted the championship’s 1968 season.
The new regulations ended the 330 P4’s racing career. Of the three examples built, chassis numbers 0858 and 0860 were converted into CanAm cars, leaving 0856 as the only unmodified P4 left today.
Tags:
FerrariLe Mans

The Ten Best Factory-Built Sport Wagons Ever Made

Ten Cars from the 1990s That Every Enthusiast Should Drive