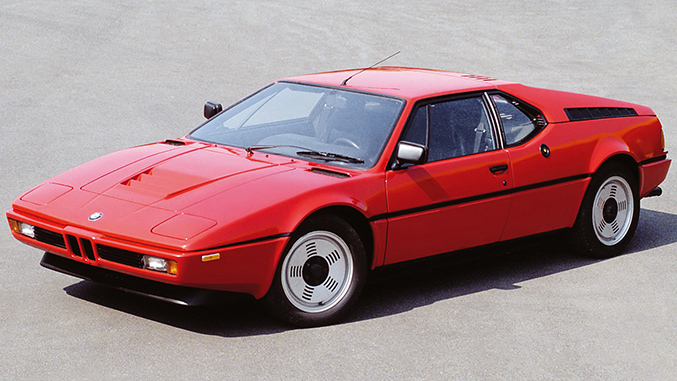 A look through the pantheon of automotive history reveals car companies have often struck up unlikely partnerships with each other.  One of the more obscure tie-ups is an agreement signed by BMW and Lamborghini in the middle of the 1970s that outlined the joint-development of a mid-engined sports car.
Although the two companies had never worked together before, BMW saw Lamborghini as the ideal partner because it knew exactly how to build an excellent mid-engined sports car underpinned by a tubular chassis.  Lamborghini was still a relatively small automaker at the time but the Countach sent shockwaves through the auto industry when it was introduced in 1974.
The deal was relatively simple on paper: BMW had outsourced the design of the car to Giugiaro, Lamborghini was tasked with supplying both the body and the chassis and BMW’s M division would assemble the engine.  Built to race in the FIA’s Group 4 category, the coupe was quickly christened M1, a moniker that proudly indicated it was the first M-designed car not based on an existing model.

Deeply-rooted financial issues at Lamborghini delayed the project numerous times, eventually leading BMW’s frustrated management to put an end to the collaboration and take matters into its own hands.  What resulted was a needlessly complex and expensive assembly line that started on the outskirts of Modena, Italy, and ended in Stuttgart, Germany.
With Lamborghini out of the picture, BMW contracted a firm called Trasformazione Italiana Resina (TIR) to build the Giugiaro-designed body with fiberglass-reinforced panels, it asked Marchesi to weld together a tubular chassis and it gave Italdesign the task of dropping the body on the chassis and providing the interior.  The unfinished M1s were then shipped to Stuttgart where coachbuilder Baur installed the engine and all other mechanical components.

Launched in 1978 with a lofty base price of 100,000 Deutsch Marks, the M1 borrowed styling cues such as its long hood, its tall rear end and its boxy silhouette from the Paul Bracq-designed Turbo concept that was presented during the 1972 Olympic Games that took place in Munich, Germany.  The M1 retained the Turbo’s eccentric twin Roundel emblems out back but the thin tail lamps were replaced with larger units sourced from the E24 6-Series for cost reasons.  In spite of its wedge-shaped body the M1 had a less-than-impressive drag coefficient of 0.40.

Power came from a 3.5-liter straight-six engine that featured dual overhead cams and a mechanical fuel injection system designed by Kugelfischer.  The engine generated 277 horsepower at 6,600 rpms and 243 lb-ft. of torque at 5,000 rpms, enough to propel the hefty 3,175-pound coupe from zero to 62 mph in 5.6 seconds – faster than the aforementioned Countach and the Ferrari 512BB – and on to a top speed of over 164 mph.  The engine spun the rear wheels via a ZF-build five-speed manual transmission and a limited-slip differential.
Racers immediately contacted BMW about taking the M1 to the track.  One of the coupe’s most notable successes came in 1979 when a French team named Hervé Poulain entered a heavily-modified M1 in the 24 Hours of Le Mans.  The car was heavier than a lot of its competitors but it managed to take sixth place overall and second in the IMSA category.

The lengthy production process meant BMW couldn’t build the 400 units it needed to homologate the M1 in the 24 months that were specified by the FIA.  Faced with the embarrassing prospect of having designed a race car that can’t be raced, BMW M managing director Jochen Neerpasch teamed up with Bernie Ecclestone and Max Mosley to launch a new race series called Procar that was only opened to M1s.   Starting in 1979, the Procar series followed the Formula 1 circuit across Europe and gave privateers the chance to fight head-to-head against some of most respected pilots in the world of motorsports.  Austrian Formula 1 champion Niki Lauda participated in the Procar series and won three out of the eight races that took place in 1979.  The event was canceled after the 1980 season.

The FIA’s Group 4 was canned mere months after BMW finally homologated the M1 in 1981 so the coupe competed in the Group 5 category.  A heavily-modified M1 with a turbocharged engine that pumped out approximately 1,000 horsepower won 12 out of the 16 races in the International Motor Sports Association’s GTO class.
BMW had built 399 street-legal examples of the M1 and 60 race-ready models by the time production ended in 1981.  M did not develop a successor to the coupe but an evolution of the straight-six engine lived on in the M635CSi and in the first generation of the iconic M5.