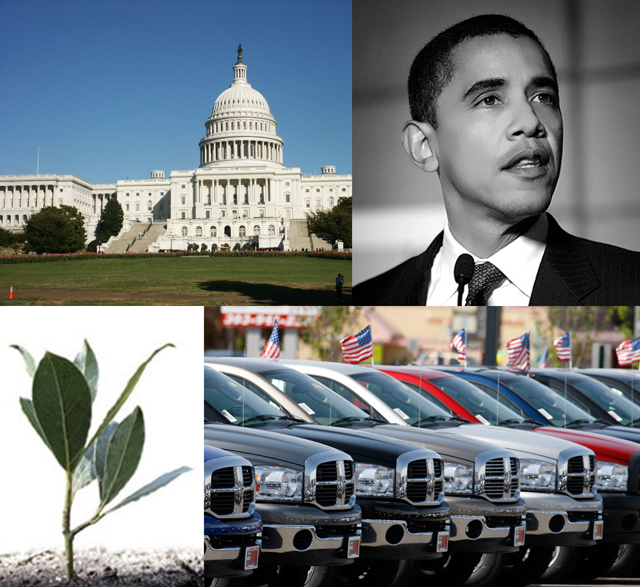 I’ve said that the domestic automakers will emerge from their recent financial difficulties in better shape than in recent memory. My point in that blog (read it here) was that the so-called bailout of the Detroit Three is the news, but it isn’t the key issue. The Detroit Three will restructure and emerge in decent shape.

I’ve also said we should care about what happens after that point. That’s because if there’s one lesson from the problems of the automakers it should be that apparently simple decisions often have lasting negative consequences. What we are deciding now are the policies for 7-20 years from now regarding fuel usage. These policies affect the kinds of cars we buy, the infrastructure of the auto industry, our transportation system overall, and the rate at which we address geo-political issues and global warming. They also affect who pays for all this.

(Please scroll down to continue reading.)My hope is that if the public is invested in the domestic auto industry (literally and figuratively), we and Congress will pay more attention to the policies we create for transportation. Those policies should make a difference to the cars we get regardless of country of origin. Enthusiasts should care, then, because those policies may allow or disallow interesting cars. Caring is one thing, caring intelligently quite another.

As an auto enthusiast, I’m worried about those policies going wrong, in part because they’re already so messed up. Last week’s announcements on new EPA rules have reinforced that view. I’m also worried that the national dialogue (or monologue, really) is messed up. The two reinforce each other.

The explanation commonly given for Detroit’s problems is something like, “They made too many big cars and trucks, which any rational person knows are bad, and that got them in trouble.” Here’s a representative quote: “…the companies have… failed to make the cars the American public wants – specifically those with better fuel economy… [We could save] $20 billion this year for the purpose of teaching Detroit a lesson.”

While your neighbor next door may appear to be an idiot, in fact consumers as a group are pretty rational.  If the cost of buying an economical car doesn’t payoff in terms of savings, then consumers on average don’t buy that car. Read our Ask It on the Tesla (a great car to drive, by the way). A typical driver would save about $600 per year driving a Tesla instead of a BMW M3. Over seven years, that would save the owner about $4200. The battery replacement after seven years costs $12,000, so on pure “power the car” costs you’d be $7800 in the hole. Sure, Tesla sells cars (about 1000 per year), but not because of those economics.

In this example, consumer costs don’t reflect total long-term costs (oil wars, global warming). Consumers mainly react only to the costs they see. There is philanthropy, though it is a niche sport, even with a President who is a pretty persuasive talker. But if economic lunacy prevails in the form of believing the problem is in the supply of technology, we won’t get the costs in line, consumers will be confused, and we’ll have a bunch of side effects (costs to the taxpayers that don’t solve the problem).

The problem we have is two-fold. First, the market price of oil is too low to stimulate demand for lower consumption vehicles. We might conclude then that high consumption vehicles aren’t really a problem. But that would be wrong. There are side costs to high oil consumption in the form of national defense and diplomacy. In addition, global warming is a real threat; it simply is a cost that isn’t reflected in the oil market (or the coal market or the natural gas market). Global warming is a deferred cost–the kind that normal economic markets don’t necessarily deal with well. (There is debate on this, but the recent world financial meltdown has certainly thrown a wet blanket on pure free market advocates.)

To address this, we could insist that Detroit (and Tokyo, and Stuttgart, etc) make even more fuel-efficient cars. That’s what the President and the EPA proposed last week when they mandated fuel economy standards for 2016. Those cars would have to be discounted to stimulate demand for them, given that the current price of oil doesn’t stimulate demand for them alone. The President also suggested that he knows this is likely by proposing that an incentive for buying fuel-efficient cars may be enacted.

The car companies and their shareholders could be paying the tax (in the form of discounts) needed to bridge the gap between market oil prices and the real long-term cost of oil. Or, those who pay taxes will fund the transition. Or both.

The car companies, wherever they’re headquartered, aren’t set up to be successful managers of public policy. And, this approach could cause Ford, GM, and Chrysler to go out of business or be owned by the government (i.e. the taxpayers). This is a strange and messy way to do things, especially after we’ve just helped them restructure.

One has to ask if making car companies suffer disproportionately is either good national policy or responsible to the taxpayers? It is hard to argue that the answer is yes, since there’s a better approach. That would be to set public policy to address the public issues and let the carmakers efficiently build suitable cars.

Doing this via economically complete energy and environmental policy is what we need.  That is, we need public policies that create the context for the kinds of cars we get. For example, if oil consumption needs to fall to a certain level to minimize geopolitical risk, focus public policy on that. You might even tax oil sufficiently to cover some of costs of defense needed to protect access to oil. You might also price for the insurance needed to cover the side costs of oil price shocks.  Ditto with greenhouse gas costs. In any event, let the public and carmakers decide the details, like what technology gets us there and how it should be packaged. And used.

Allocating these costs to oil users simply recognizes that consumers are the real source of all responsibility anyway, so that seems practically and ethically right.

Once you realize who really has responsibility here, it reinforces the sense that mandating the kinds of cars we get directly via public policy probably isn’t the optimal path. But that’s what the EPA currently does, and that’s what is being discussed for the future.

In case this isn’t clear, note that I didn’t say, “Focus public policy on the fuel economy of new cars.” That’s because the second problem (the first being the market price of oil not encompassing side costs and long term costs) is the allocation of the solution. Basically, we have been running public policy in a way that slows progress toward a low-oil-consumption, low-greenhouse-gas-emissions world. And that, in turn, is because we are trying to get a small percentage of people to solve the problem.

The people we’re trying to get to solve the problem are new car buyers with irrational conscientiousness. Here’s how it works. To get lower oil consumption, we regulate fuel economy for new cars. Seems good. But that doesn’t help with the amount of miles driven (how oil gets used). Nor does it impact owners of older cars (at least not until well into the future). And, by raising the price of cars, it creates a disincentive to upgrade to low oil usage vehicles. The burden of lowering oil consumption falls on new car buyers who don’t drive much.

Just in case you aren’t familiar with all the arcane statistics of our country, you should know at this point in the argument that there are about 250 million passenger vehicles registered in the United States. If new car purchases get up to about 15 million per year, then it takes 17 years to replace the installed base (not exactly, but close enough).  With growth in the installed base, that number grows.

The faster you want to solve the problem, the bigger the share of it falls on this group of small group of new car buyers who don’t drive much. Note that this could mean that many limited use enthusiast cars are effectively banned so that you neighbor can continue commute 60 miles daily in his 1999 Land Cruiser or her 1989 Volvo 850 with its high emissions and low fuel mileage.

A similarly twisted policy operates in the greenhouse gas world.  First, we don’t regulate greenhouse gas emissions at all. We do regulate fuel economy, though. That helps, except for the weird new-car-focused, trucks-get-a-pass way that we do it. Oh, and it only sort of helps because it only addresses greenhouse gases from oil. In principle you could make a coal-burning car and drive it as much as you want regardless of CO2 output.

Second, as we begin to start discussions of regulating CO2, we start with cars. Of course, cars and trucks are 21% of greenhouse gas emissions in the U.S., so our drive to attack only part of the problem continues with stunning consistency.

If you start with a morally propelled notion like “cars are bad”, maybe this all makes sense. Such an approach is a form of social engineering that has unnecessary costs.  Some of those costs may hit enthusiasts hard. This morally fueled ideological stuff is also an approach that many, myself included, were hoping we were moving beyond.

You don’t get cost-oriented, fair public policy aimed at serving the people of this country if you blame carmakers for not doing your job for you. Congress needs to get this right. Congress and the President need to step up to the plate and directly address these issues instead of trying to act like they can be addressed painlessly and with little cost by burying the costs in ineffective regulation of a small part of the market.

The time for smooth platitudes and pragmatic repetition of the sins of the past is over. There’s little evidence that this can happen if we the people don’t insist on it. That’s our job in a democracy.