Back To School: We Preview Aston Martin’s Performance Driving Course 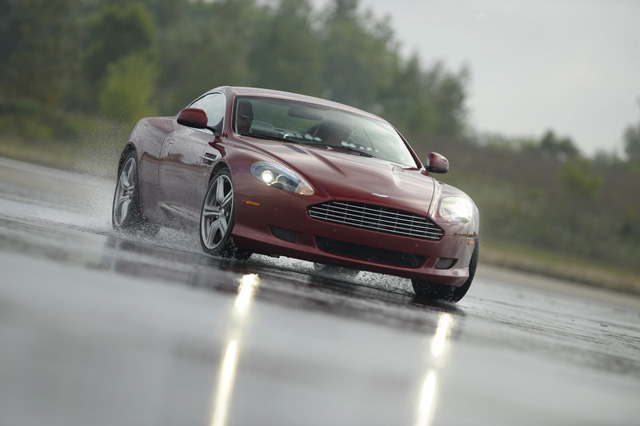 We’ll be honest—it’s not very often that we get to fully experience the superb capabilities of the high-performance cars that roll through our test fleet. And when we look outside the world of our editorial offices, we realize that many consumers who buy top-dollar, big-power cars might not necessarily know how to skillfully push their cars to the limit, either. Because of this, the folks at Aston Martin have created their Performance Driving School, where customers can come out to one of three different locations (Millbrook Proving Ground in England, Lommel Proving Ground in Belgium, or the Michigan Proving Ground just north of Detroit) and have a day of professional instruction where they learn how to properly experience the full potential of their cars. Cost of admission? $2500 for a full-day program.

The folks at Aston Martin invited us to preview the same courses that customers go through, and we gladly accepted. This would not only allow us to brush up on our dynamic driving skills, but it would give us the chance to spend some more time with the latest crop of Astons—the V8 Vantage, DB9, and DBS coupes.

When you look at the Vantage, DB9, and DBS all parked next to each other, it’s hard to tell them apart. Yes, there are little design differences—the V8’s led headlamp inserts, the DBS’s bulgy muscles and air intakes, the 9’s simple elegance—but on paper, these are very different machines. Our Vantage, with its 420-horsepower V-8, was the only car equipped with a manual transmission. The other two benefited from Aston’s latest Touchtronic 2 setup, which we found to be a good fit in both cars. We love proper do-it-yourself gearboxes, but having the paddle-shift option in the DB9 and DBS allowed us to focus more on steering and braking without having to worry about operating a third pedal in the midst of all this. The DB9 and DBS both use 6.0-liter V-12 engines, rated at 470 and 510 horsepower, respectively.

Not much has changed for 2010 in the Aston lineup, save some new color choices, a six-bar grille design, and some new options, including a fabulous Bang & Olufsen sound system. After studying our playthings for the day, we were ready to hit the road.

The Romeo proving ground (owned and operated by the Ford Motor Company) has a wide, 2.5-mile straight that runs right through the middle of the landscape. Here, we were told to get the cars up to 120 miles per hour, coast, and then slam on the brakes as hard as possible, holding the middle pedal down until the car came to a complete stop. All three cars handled this without any drama, and the carbon ceramic brakes on the DBS were extra nice. There was very little in the way of front-end chatter from the test group, or did things ever get unwieldy. We managed to achieve about 1.2 gs of brake force with complete composure.

Before customers are let loose on the higher speed hill climb course (more on that in a minute), they must first learn the fundamentals of steering, handling, braking, and holding a line while in a track setting. This course taught us the proper ways to brake, turn-in, accelerate, and exit while cornering, and though we only saw maximum speeds of about 55 mph here, this precision circuit allowed us to focus on the real driving differences between the cars.

The Vantage was our favorite on this course. It is the most nimble, most agile member of the Aston family, and we enjoyed it immensely. The engine is set behind the front axle with the transmission housed behind the cockpit, creating a perfect 50/50 weight distribution. After running a few laps in the Vantage, we stepped into the DB9, and it was clear to see that this car is more of the Grand Tourer of the whole group. The DB9 exhibited substantially more body roll than the V8, and it felt a bit nose-heavy during initial turn-in and braking. We must also remember that the DB9 and DBS are larger than the V8—able to seat four people in a two-plus-two configuration—and the small increases in size are really noticeable here. Sadly, we didn’t have the chance to drive the DBS on this course, but we still think that the V8 would be our favorite here. Shorter, more nimble vehicles always win on circuits like these.

After our time was up on the precision course, we drove the DB9 over to a wet skid pad with cones set up in the shape of a circle. Here, we would feel the differences in handling on slippery surfaces with traction control on and off—something we in the Snow Belt are very accustomed to experiencing in the winter months. Obviously, with the DSC turned off, the DB9 was prone to having its rear end swing way out of control under partial-throttle acceleration, and despite our best maneuvers to clock the steering wheel in the opposite direction and power slide around the cones, the slippery surface got the best of us.

When we turned traction control back on, it was easy to control the DB9 around the wet course, the system interfering when it detected wheel slip, and it kept us on course. Even when we floored the throttle and tried to get the car completely out of line, the DSC limited our power inputs and eventually brought us to a very anticlimactic halt. It wasn’t much fun, but if that were to happen out on the highway in a snowstorm, we wouldn’t be complaining.

This is what we were waiting for. It was time to take the knowledge that we gained in the lower-speed precision handling circuit and pair it with some wider roads, longer straights, and more swooping turns. We hopped in the Vantage again for this one and saw triple-digit speeds along one of the downward slopes. This is not the sort of tire-chirping, gear-wrenching course that you might think—it instead focuses more on teaching drivers the fundamentals of track driving at higher speeds. The instructors monitor your braking, acceleration, and turning points, along with ensuring that you keep a proper line around the course. What’s more, as the name suggests, the whole track is built into a giant hill, so there are lots of elevation changes to make things a bit more difficult. We enjoyed wringing out the V8 Vantage here, especially when we kept the revs above the 4500 rpm sweet spot. The engine really livens up in the higher end of each gear, and the sound is something that every gearhead needs to hear at some point in their life. Marvelous stuff.

We took the DBS for a spin out here, too, and its higher power and better brakes were really noticeable here. We were able to gain substantially more exit speed than in the Vantage, and we could brake later heading into a turn because of the added grip that the carbon ceramics offer. Still, we think that for hardcore track purposes, the V8 still takes our top vote.

There’s nothing like a five-mile-long, smooth surface, five-lane-wide oval with parabolic turns to test out high speeds. The Aston Martin team was given permission to break the speed rules of the Ford officials, and we were able to experience the road-going characteristics of the three Astons near their top speeds. After a few warm-up laps, we found ourselves exiting the parabolic turns at speeds in excess of 150 mph, on our way up to a top speed of 175 mph in the DBS (the V8 only got us up to 171). The cars never felt out of line up near their top ends, especially the DBS, which felt like it would have no problem cruising at 170 all day long. We had to put our knowledge of hard braking to good use here, since entering the bowl at anything more than 125 mph was not recommended. As it was on the straightaway, the cars were solid performers through these exercises—we never felt the brakes struggling to manage the speed, and the chassis stayed stiff and planted to the ground as we barreled around the oval. Most Aston owners won’t ever get their cars up to this high of speed on public roads, save the Autobahn, but it’s nice to see that when pushed to the limits, these cars are absolutely capable of handling the ultra-fast travel.

At the end of the day, we felt like we had better improved our abilities to handle Aston Martins (or any performance car, really) at their limits, and it showed us that these three test cars are very different in terms of dynamics and capability. The V8 Vantage is clearly the track-day performer here, while the DB9 is more of the road-worthy long-distance cruiser. The DBS, obviously, combines the best of both worlds, but we still preferred the V8’s manners on our test courses. All three cars proved to be nothing short of elegant and comfortable, and potential Aston owners should be wise to check out all models before making a final purchase decision. These cars have a lot to offer, but in different ways.

As for the Performance Driving School, we wish we could have spent a full day at the proving grounds to fully master the different courses and really get a feel for how each car performs. A customer can really get a better feel for how their individual car performs, and it’s an educational and exciting experience. If we ever buy an Aston of our own, you can bet that we’ll enroll.