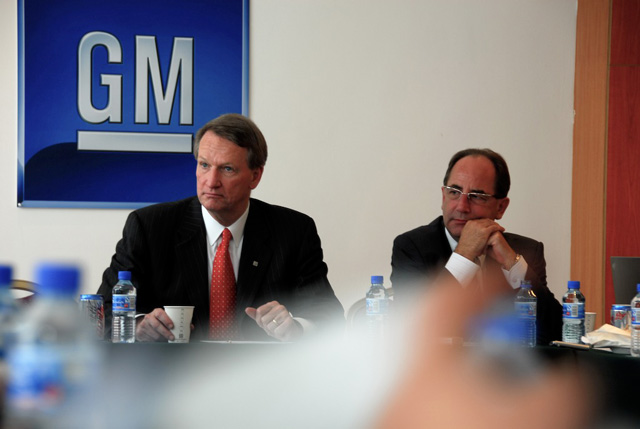 I confess to having mixed emotions about the Obama administration’s move over the weekend to throw Rick Wagoner under the Escalade.

On the one hand, Mr. Wagoner was pretty clearly toast last fall. He had to get the axe, at a minimum for political reasons, but for sound reasons as well.

General Motors’ (and truth be told, the Detroit Three’s) approach to the federal bailout was politically obtuse. The use of corporate jets was a minor thing in comparison to the lack of preparation. When you meet with funding sources, even if you’re not desperate, you are prepared. That’s true if you’re running a start-up and doubly or triply true if you’re running a $100 billion mega-corporation.

That lack of preparation, though, doesn’t compare to the cardinal sin of being given a second chance to develop an acceptable plan and then coming back with something that at best is uninspired and more likely should be called thoroughly lame. The leader of one of the great corporations of the world, with a staff of brilliant people, should produce an inspired plan. We should have seen something tough, radical and capable of returning GM to some form of glory. Something worthy of the great people and heritage of the automaker. Tweaks and adjustments don’t, and didn’t, cut it.

The above all helps to reveal the final problem, which I think is the real problem. Mr. Wagoner was clearly married to the past. He wanted to defend what he and GM had done, rather than realize that GM had fallen off a precipice that rendered the recent past irrelevant. We can speculate about whether he was too focused on saving his job, too egotistical to admit he hadn’t been bold enough or too close to the problem(s) to see the big picture.  It doesn’t really matter; GM needs an agent of big and swift change and Mr. Wagoner clearly wasn’t it.  It happens all the time, it seems unnecessary, but nine times out of ten funding providers eventually conclude that a change at the top is all upside.

In a way, I hope that was Steven Rattner’s logic. If so, maybe the administration is serious about not wanting to run GM. I don’t fear that possibility out of some right wing theory that government is poison. I fear the involvement of politically motivated, lightly involved people with little skin in the game in a very complex and dynamic business. I speak from the experience of years as a management consultant working with top executives at Fortune 500 companies. Fixing GM for real ain’t gonna be easy.

Beyond that, my concern is that the U.S. Congress, and quite possibly this administration, suffers from some of the same problems that GM has. First on the list here in the auto industry was the unwillingness to deal with legacy costs. GM made commitments 30 and 40 years ago that have made it systematically uncompetitive for the last few decades. No GM chief executive, including but not limited to Mr. Wagoner, really wanted to deal with these costs. Why? Because doing so would put their jobs at risk. That might be understandable on a human level, but it isn’t leadership.

As a country, we certainly have legacy costs. Social Security and the national debt are well known, but to those one would also have to add the baby boom bubble of health care costs. There are certainly others in the environmental, defense and infrastructure categories.

Those are generally serious issues, not specific to the auto industry, and I leave such issues to other commentators. The automotive issue that worries me with the Congress and the executive branch is less about how to reduce costs and more about leadership. The worrisome thing is the “deal with” part of leadership. Specifically, there is a tendency for Washington to “deal with” issues like greenhouse gas emissions and dependency on imported oil with cowardly regulation of new cars rather than with straightforward taxation or policy that affects all users.

A gasoline tax, likely combined with some even-handed emission policies, would not suffer from this problem. But such an approach might be politically ugly for Congress. Just like dealing with unions and dealers might have been ugly for GM management.

The administration seems to want to enact additional environmental policy by forcing the automakers to produce specific Politically Correct cars. That’s asking for trouble. But if the past decade has shown anything, it shows that Americans mostly don’t want more politically correct cars (there are many available), at least at current gas prices. You can’t just change the supply of PC cars without changing the demand.  Again, a gasoline tax—gradually enacted—would work on the behavior of the entire market, not a fraction of it. And it would put marketers and the consumer in charge of product offerings, not a bureaucrat.

Making PC cars that break with market demand likely acts to make these cars more expensive. This, in turn, dampens demand in a time when we’ll be trying to get back the money we poured into automakers to save them from demand that has imploded. And these policies could lead to unwanted vehicles that must be deeply discounted, further damaging the cash flow of the companies we’re funding. An appropriate response might be “Who came up with that plan?”

When I hear it described, the regulatory approach seems piecemeal. In the case of greenhouse gases, Washington seems to view automobiles as a uniquely significant and distinct element of the problem. Yet, we know that automobiles are less than 20 percent of greenhouse gas emissions. To judge from the rhetoric and the policy approach that doesn’t seem to be the understanding of our politicians.

Finally, there is the legacy cost of the Detroit Three brands. Not health care, but Detroit’s sluggish response to quality issues in the ‘70s and ‘80s. This extended moment of insanity reduced Detroit’s brand equity for several generations of buyers. When you combine that with a multi-decade focus on mass-market product to fill over-sized factories, you have a brand problem that won’t go away quickly. Does Washington, with its 1 year election cycles (brand building measured in months) and 4-year time horizon, have the patience and savvy to allow Detroit to fix that?

I worry that a lot of folks in D.C. are trying instead to look good in front of the board (voters) and save their jobs. Sound familiar?

I don’t think is has to be this way. But for things to be different we’ll need sustained leadership, vision and understanding. Blaming Rick Wagoner won’t be nearly enough, and probably hurts. Taking a lesson from his demise, though, might help. Without that, we’ll need a few more Escalades (Hybrids of course).

First Look: BMW X5 And X6 Get The M Treatment For New York