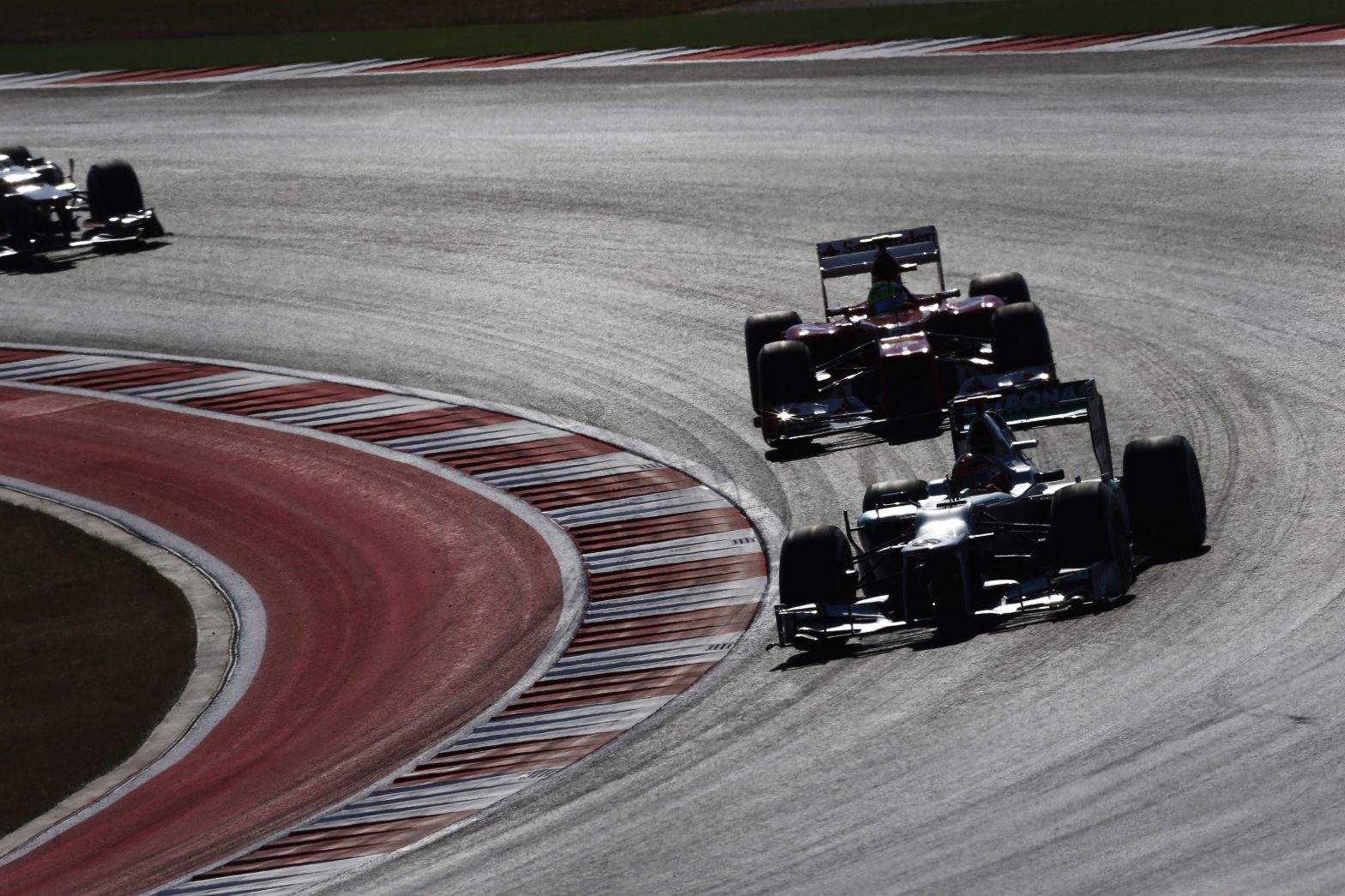 In my last piece on this subject, I observed that in the US press this meme about Formula 1 fans not liking F1 got repeated often in the run up to the USGP, though almost always without any data (Americans don’t like numbers?). Data on 2012 race attendance has just been published, and interestingly enough the two races most likely attended by Americans (US citizens)—the Grand Prix du Canada and the United States Grand Prix—ranked second and third out of twenty races on the F1 calendar. In other words, based on attendance last year, the meme is wrong.
I pointed out that if you are a fan, and you’d like to attend races on or near your home turf, raw attendance size is important because, in F1, where races happen depends significantly on the economics of attendance (gate revenue and related sponsorships and merchandising).  Unlike most national sports (e.g., football, baseball), F1 venues are not primarily funded by TV revenue. This is an important, but often misunderstood point; for basic background see our Primer On F1 Economics below*. The strong attendance numbers suggest that North American venues have a good future.
I do think TV viewership is important, though, so in this second article I want to look at that. TV viewership is important for several reasons, most of which are softer than venue selection and have an indirect impact on fans.

First, TV viewership is important because it indicates the health of the sport in a country. At some point (though it is hard to know exactly what that is) TV viewership falls to a point where the crowds go away and the attendance numbers aren’t what they need to be.
Second, TV viewership can affect how the overall season TV package is presented to fans. In places where viewership falls below a certain share level, F1 has tended to switch to a pay-per-view model, for example.
Third, TV viewership affects the social value of F1. F1 seems to be a niche sport, and most fans accept or even embrace that, but if TV viewership grew enough that F1 was covered in newspapers, TV or radio, it would change the social equation (e.g., the water cooler effect). Residents of Austin experienced this with CoTA, where suddenly F1 was a social topic with people who never would have taken part in a racing discussion previously.

And finally, TV viewership, and its growth or decline, is a great indicator for F1 executives on whether the product is getting more or less competitive. Thus, TV viewership is a leading indicator of possible changes in the sport (e.g., DRS).
With that preamble out of the way, here are the numbers, rarely discussed though they may be (from the F1 2012 Global Broadcast Report):
Annual F1 Viewers
Total F1 Global Audience: 502 million
Average audience per nation/territory: 2.7 million (185 nations/territories)
Annual Viewers By Country**
Brazil: 85.5 million
China: 48.9 million
Italy 42.3 million
Germany 34.3 million
Spain 31.6 million
Britain: 28.6 million
Russia: 13.8 million
US: 9.7 million
**Selected large markets.
That data certainly show that US viewership is much smaller than in many other countries. And on a per capita basis, the US looks even weaker (all the countries above except China have smaller populations and more viewers). China and the US aren’t very different in terms of F1 share per capita, but China is a much poorer country with lower household TV penetration. So, I would say that compared to other countries for which we have data, Americans don’t like F1 (as much) when measured by TV viewership.
That perspective is reinforced when you look at viewership for other major sports:
Average NFL game TV viewership (per game): 16.6 million
Average NBA game TV viewership (per regular season game): 2.4 million
Average NASCAR Sprint Cup race TV viewership (per race): 5.8 million
So, F1 in a year has viewership somewhat like a single NFL game. If you were a media mogul or a broadcast journalist, that would have to be taken into account.
With hundreds of channels possible, and many hours to fill, the main thing TV execs have to worry about, in a situation like this, is getting the cost of F1 TV down. And certainly, with F1 doing the camera work—leaving Leigh, David, and Steve in a studio and only Will on site—costs are lower than they are in the NFL (I assume that TV rights costs follow audience size and day part, so that cost is automatically adjusted). These are the reasons we’ve had F1 broadcasts for years, despite the niche nature of the sport. Bass fishing and bowling are also on TV and have been for decades. F1 is unlikely to go away on TV.
That security could be reinforced as internet-based program delivery expands. Realistically, there is already English-language coverage of F1. All it would take is a credible internet promotion and distribution system to pay the F1 and, say, BBC licensing fees. The content itself already exists.
With existence pretty well assured, we are left with the question of F1 growth in the US. If, as a fan, you wanted F1 to grow, you’d probably want that for two reasons. If F1 grows, the quality of the TV package should stay high and might even get better (e.g., NBC’s re-broadcasts seem to be in more popular time slots than Speed’s were). Also, if F1 grew in the US, there might be long-term room for another race (New Jersey) or two (California is the obvious market).

Many words have been spilled on what it will take for F1 to grow: more domestic races, consistent presence, high quality venue(s), high quality locations, broadcasts at normal sports viewing hours, press coverage, an American driver or drivers, increased spectacle, celebrity involvement, and more. Some of those things are easier than others, but we would suggest that CoTA and Austin set F1 on a good course.  But the deck is sufficiently stacked against F1 that growth will be relative to the current small base, not transformative (i.e., don’t sell your NBA franchise because of F1).
But we don’t really need much, if any, of that change. If you like F1 now, it mostly has what you need. We have two easily accessed races, both are in great locations worthy of destination travel (and New Jersey would fit this picture, too), and our TV coverage is pretty good.
Which is to say that a better meme than the one in the headline, but one that is not as attention-grabbing, is “Americans like F1 enough for it to be a well-presented niche sport.” It isn’t even close to mass market in size and doesn’t have the structure to make it mass market. Fortunately, existentially F1 doesn’t need to be mass market, and philosophically it may be better off not being so.

This is an oversimplification, but here is one way to think about F1 economics for a race (CoTA example):

1. TV revenues are $X. They go to F1. They don’t matter to CoTA one way or the other as cash flow (but they help enable F1 to show up with cars and drivers).

2. TV broadcasters, who cumulatively pay $X must sell ad space to cover that cost. Apparently they do this, or think they can, because there have been TV contracts for a long time. Note that $X is global, not just US TV money.

3. Some of the TV money goes to the teams, who also sell sponsorships. This pays for the multi-hundred millon $ engineering budgets of modern F1. The rest goes to F1 promotion, administration and to buy large homes for Bernie.

5. The State of Texas pays the F1 licensing fee of $25M. Yes, the State pays the fee, but they collect as well in step 4. Tax increment financing is not subsidization if it works. So net subsidization is zero (actually forecast to be negative, i.e. TX makes money of about $5M). Doesn’t affect CoTA, though this is another place where attendance matters.

7. CoTA sell tickets and food and merchandise. 100k [email protected]$300 = $30M. CoTA has some expenses, so maybe they net $20M. That’s a 5% return — enough to pay debt service, perhaps. But they also can generate revenue from the facility for the rest of the year. If they can make another $20M or $30M maybe that gives a satisfactory return.

These are rough guesses, but the point is that this is a system where everyone is happy because everyone gets paid and makes money. And so it seems sustainable. F1 gets its fee and TV money. Teams get some revenue sharing. TX gets exposure and ~breaks even on F1 fee. CoTA pays its investors a return that might be acceptable. No one appears to be losing money. At least If attendance stays high and the other series and concerts and testing fees and SCCA weekends, etc. pay enough.

Video: How Not To Apply Sponsorship Livery