Features, Lifestyle I By Justin Cornelison I December 02, 2022 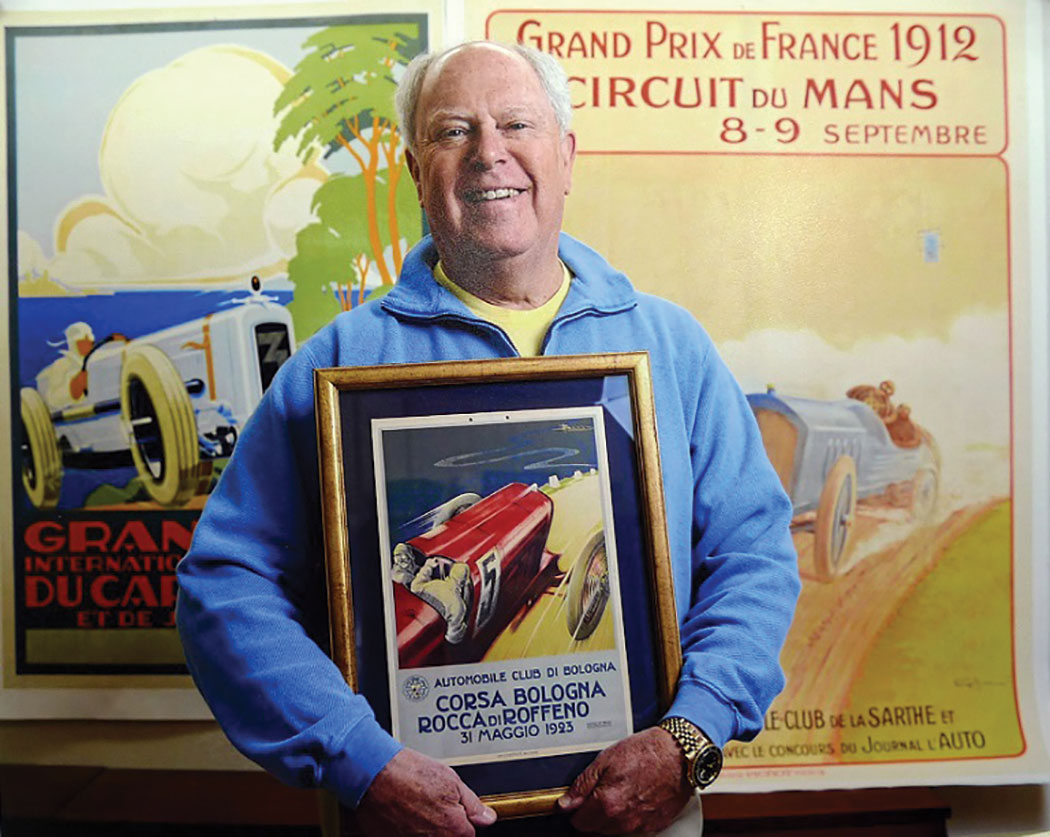 A lot of businesses tout the uniqueness of their products, especially when the holidays approach. But one would be hard-pressed to find items that are as unique and rare as what Everett Anton Singer offers at his online shop: one-of-a-kind vintage automotive posters that go as far back as the late-1800s.

Singer, “Tony” to his friends and clients, is not only the founder of Vintage Auto Posters (https://vintageautoposters.com), he is the collector, curator, packer and shipper of his posters. And he only has one employee — himself.

“There’s nothing else in the world like this site, just for the specific content, vintage auto posters,” says Singer while simultaneously on a phone call, juggling an issue with FedEx and answering a visitor’s question. “I have 450-plus vintage posters from 1895 to the 1970’s, and most of what I have is European, there’s very little domestic. It’s a joy and I’ve been doing it for 42 years.”

When he started out more than four decades ago, he had to reach buyers through advertising and word of mouth, but the internet changed all that and allowed him a global reach for his posters.

“When I started out it wasn’t visual, now it’s absolutely visual,” he says. “I have a new website through Shopify and it’s dramatically different (than the previous site).”

Singer says the new website allows collector’s a better visual, browsing and buying experience and at the same time demonstrates the uniqueness of Singer’s site and offerings.

“One of the key things about me is that I thrive on differentiation, I don’t want to be like everybody else, I want to be different,” he says. “The posters I have are for serious collectors and 99% of what I have is guaranteed original. I have to be sure it’s real (before he buys or sells a poster).”

Singer is the only dealer in the vintage automobilia market who is a member of the International Vintage Poster Dealers Association (IVPDA), thereby further assuring that his posters are guaranteed original. He adds that he personally only knows a few other dealers who carry vintage posters, but that it’s just a small slice of their businesses while 99% of his is vintage posters.

But Singer is more than just a seller of vintage automobile posters, he’s been a car buff and sports car owner since 1971 (a 1963 Porsche 356, which he owned for more than 30 years); has a bachelor’s degree in art from the University of Denver, where he studied interior design, sculpture, and painting; transformed his family’s New York social printing business into a high-end four-color printer, and the early 1980s, he changed the way that automobiles are photographed, showcasing a car’s beauty and functionality by highlighting its colors, shapes and curves. That resulted in a five-color process coffee table book, “Ferrari: Beauty & Detail.”

Ironically, it was that very first Porsche 356, often considered the company’s “first” production model, that launched Singer on his journey to becoming one of the top, if not the top dealer in vintage auto posters.

“I was just very lucky,” he says about how he became the owner of the iconic car just a year out of college. “It just opened up a lot of doors and educated me in a lot of ways.”

As student he frequented the local Denver Porsche dealer, which would offer him company posters from time to time. He started buying and collecting auto posters, then started selling the excess that started accumulating. He started collecting in earnest in the early to mid-1970’s, then from 1972 to 1997 he and his brother took over the family’s printing business, which they expanded and modernized. That’s when his poster business, which was a side business to the printing company, also became active.

“Doing posters is what I wanted to do, I just had to find a more efficient way to do it,” he says. Enter the World Wide Web in the mid-1990’s, which allowed him to expand his reach, his client base and his poster collection.

By the time he moved to California in 2003, his poster website was in full swing and he was gaining a reputation as one of the top vintage auto poster dealers in the world. And he became such an expert on vintage auto posters, he can often  determine whether a poster is authentic or not just from a photograph.

“I know what certain things are supposed to look like. I have a frame of reference not a lot of people have, I have so much experience,” he says, not just his deep experience in posters, but cars, photography, printing and art.

In addition to his poster business, Singer also organizes and runs the annual Automobilia Monterey (AutomobiliaMonterey.com), which he has been doing for the past 18 years and features 30 vendors (including Singer) and deals in a variety of auto collectibles, from art and books to photos and posters.

“It’s been fabulous, people absolutely love it, and that’s because people are buying what they love,” he says. In fact, that’s one bit of advice he would give to anyone considering buying automotive art and posters.

“Art should be something you love, that makes you feel good and means something to you,” he says. “One has to feel some connection, it should be there (on a wall or displayed) because it works for you. For whatever reason, if it resonated with you, that’s all that counts.”

In his leisure time he plays tennis, works out three times a week, listens to classical music and putters around in his garden. And he’s still an avid car collector — he as three sports cars, a Porsche, BMW and an “old Ferrari Dino.” In fact, in addition to posters, he also has manufactured and sells leather goods for Porsches, such as interior luggage straps, as well as an assortment of vintage auto-related window cards, books, signs and pins.

“I’m supposed to be semi-retired, but I love what I do, so I do it,” he says, adding, “I have a comical way of looking at things when it comes to collectibles. Why go to a candy store without money in your pocket? Be prepared, opportunity will come your way if you’re prepared. It has served me so well over the last 50 years.”