A Brief History of Cooper Motorsports 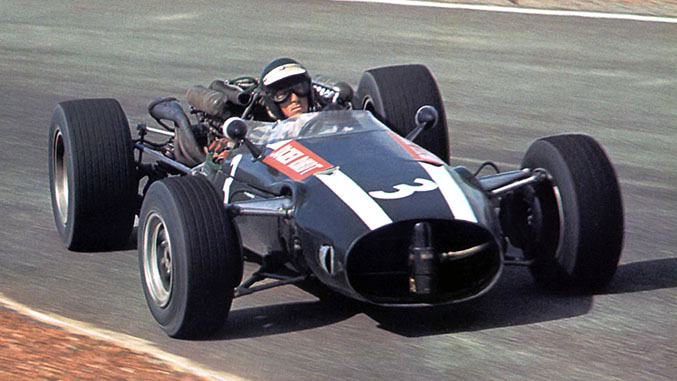 Photos courtesy of AutoWP, RM Auctions, and Bonhams
A mechanic by trade, Charles Cooper teamed up with his son John and a young man named Eric Brandon to build a race car in the middle of the 1940s. Designed merely to compete in hill climb events in post-war England, the very first Cooper was a highly experimental racer whose platform was essentially made up of two Fiat Topolino front ends bolted to a simple ladder frame.
The team opted to power its racer with a Jap Speedway motorcycle engine that spun the rear wheels via two chains, a first one that drove the gearbox and a second one that drove the axle. The engine was located directly behind the driver for fairly straight-forward packaging reasons, a setup that paved the way for Cooper’s success in the late 1950s.

T500
The racer was christened Cooper 500, a name chosen because the car was designed to compete in the 500cc class that would eventually be renamed Formula 3. Light and agile, the Cooper 500 was a remarkable success that convinced Charles, John and Eric to move forward with the Cooper Car Company.
Cooper continued to race while fine-tuning the design of the 500. In 1948, the burgeoning company announced an initial production run of 12 cars that were offered to privateers. Ten examples were fitted with a 500cc engine and priced at £575, while two cars boasted a longer chassis and a bigger 1,000cc engine for just £200 more. The Coopers immediately became popular, and one of the company’s first customers was none other than Stirling Moss.

T20
Encouraged by the success of the 500, Cooper Cars quickly turned its attention to Formula 2, a category that was officially introduced in 1948. With the help of engineer Owen Maddock, the company designed a front-engined Formula 2-spec racer called T20 that was raced by a number of teams including the Ecurie Richmond that was owned by company co-founder Eric Brandon and Harry Schell’s Ecurie Bleue, as well as by privateers like Mike Hawthorn. Many of the Formula 2-spec Coopers that competed in 1952 were powered by a Bristol-sourced straight-six engine rated at approximately 130 horsepower, but teams occasionally equipped the cars with Alta-built four-cylinder units. An evolution of the T20 called T23 was introduced in 1953, the same year that Cooper participated in Formula 2 championship with its own team.
The company went back to rear-mounted engines in 1954 when it introduced a new series of cars nicknamed Bobtail. Aerodynamic and light, the early Bobtail cars were powered either by a 1.1-liter Coventry Climax engine that sent 75 horsepower to the rear wheels via a highly-modified Citroën–sourced four-speed transmission or by a larger 1.5-liter four-cylinder. The first Bobtail, called T39, featured an innovative tubular chassis, an alloy body, a center-mounted steering wheel and drum brakes integrated into the wheels.

T39
Australian pilot Jack Braham convinced Cooper to build an evolution of the T39 that was capable of taking on big names in Formula 1. Called T40, the first Formula 1-spec Bobtail made its racing debut at the 1955 British Grand Prix with a 2.0-liter Bristol engine that was tuned to generate about 150 horsepower. Engineers had to remove the Bristol transmission’s first gear in order to get it to fit in the engine bay. In theory, hitting the track without a first gear was possible; it would simply make the car slower to take off from the starting grid. However, the clutch unexpectedly failed on the morning of the race and the team had to run out and push Brabham in order to get the T40 rolling. The car retired after driving 30 laps without a clutch.
Evolutions of the Bobtail successfully competed in Formula 2 events over the next few years, and select teams even entered the car in a few Formula 1 races.
In the wake of new regulations, a British team called Vanwall decided not to fly out to Buenos Aires for the 1958 edition of the Argentina Grand Prix, leaving Stirling Moss without a car to drive.  Moss and Cooper quickly signed an agreement and the now-famous British pilot found himself behind the wheel of a Cooper at the starting grid.
Surprisingly, Moss drove the rear-engined car to victory, beating a privately-entered Maserati driven by Juan Manuel Fangio and Ferrari’s new V6-powered Dino 246. Moss amazingly drove the Cooper with worn tires because it wasn’t equipped with center-locking wheels and he feared that a pit stop would cause him to lose too much time.
With the help of Maddock, Cooper had fully fine-tuned the rear-engined layout by the late 1950s. Installing the engine behind the passenger compartment eliminated the need for a driveshaft, saving weight and lowering the center of gravity by making it possible to mount the seat closer to the ground. Additionally, it made the car more aerodynamic by allowing for a lower front end.

T51
Eight rear-engined Cooper T51s showed up at the starting grid of the Monaco Grand Prix, the first event of the 1959 Formula 1 season. Braham won the race and went on to take first in the British Grand Prix, Moss won in Portugal and in Italy behind the wheel of a Cooper entered by Rob Walker’s team and Bruce McLaren – a Cooper works factory pilot – took first in the United States Grand Prix that was held at the Sebring International Raceway. Braham won the 1959 World Championship and Cooper took home that year’s constructor’s title, a first for a rear-engined car.

T53
Cooper introduced the T53 in 1960. It was an evolution of the T51 that stood out thanks to coil springs and an even more aerodynamic body. The Cooper was again successful, with Brabham winning five consecutive races in the middle of the season. He won the World Championship with 43 points, and Cooper earned its second constructor’s title with 48 points.
Cooper’s victories raised eyebrows all around the world and the competition wasted no time in catching up. Ferrari and Lotus started toying around with rear-engined race cars in 1960 and the entire field gradually ditched front-mounted engines over the following years. Ferrari all but dominated the 1961 Formula 1 season and Cooper placed a distant fourth. Cooper took third in 1962, fifth in 1963 and again in 1964. During this time, private teams continued to race Cooper cars at events held in Europe, in the United States and in South America. A Cooper T57 Monaco owned by Ecurie Ecosse was even entered in the 1961 edition of the 24 Hours of Le Mans but it dropped out of the race after completing just 32 laps.
1964 was a tragic year for the Cooper Car Company. Founder Charles Cooper died and his son John had to ask Ken Tyrrell to run the Formula 1 team after he was injured in a serious car accident. Cooper fared poorly in 1965 and John decided to sell the team to the Chipstead Motor Group. He retired from racing and opened a car dealership.
Chipstead relocated the Cooper factory and designed a new car that was powered by a Maserati-sourced engine. It won a single event – the Mexican Grand Prix – in 1966 and it managed to finish third in the overall standings behind Brabham-Repco and Ferrari.  BRM-engined Coopers were introduced in 1968, another tragic year for the team. One of its two main pilots, Ludovico Scarfiotti, was killed while racing a Porsche in a hill climb event and its second pilot, Brian Redman, was injured in a huge accident that took place on the Spa track in Belgium. Chipstead shut down the Cooper team at the end of the year.
The Mini Connection

2015 Mini Cooper JCW
How does the name of a rear-engined Formula 1 car end up on the trunk lid of an expensive retro-styled city car manufactured by BMW?  The connection isn’t as far-fetched as it might seem: John Cooper was friends with Alec Issigonis, the man who designed the original Mini that was introduced in 1959. Story has it that Cooper noticed the Mini’s potential as soon as Issigonis showed him early design sketches.
Issigonis designed the Mini as a frugal economy car and he was hesitant to turn it into a full-blown rally car. However, Cooper started tuning the Mini in his spare time shortly after it was introduced and he eventually convinced British Motor Corporation (BMC) CEO George Harriman to offer the hot-rodded economy car to the public as a limited-edition model.
Offered in several states of tune, the Mini Cooper became a smash hit and it made headlines all around the world in the 1960s by beating larger and more powerful V8-powered cars in the annual Monte Carlo Rally.
Tags:
Charles CooperCooper Car CompanyEric BrandonFormula 1Jack Braham

Racecar Profile: Elan NP01 – The Race Car You Would Design