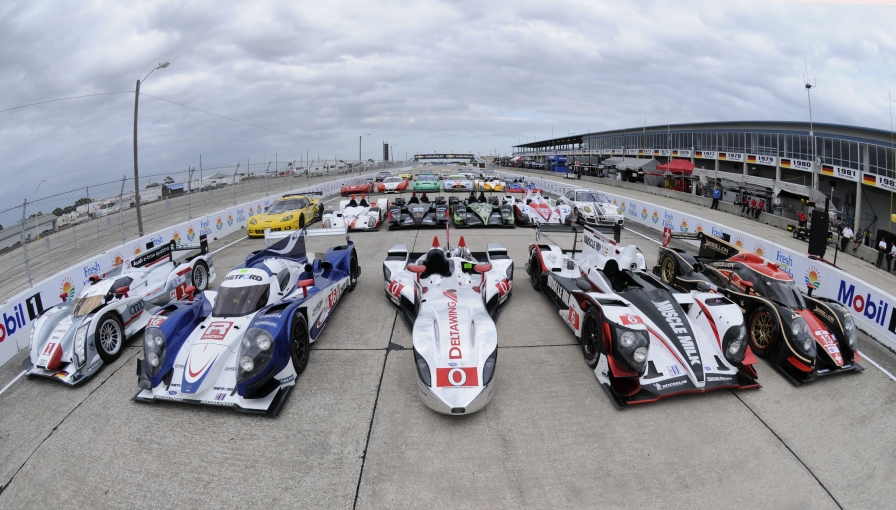 The 61st running of the 12 Hours Of Sebring is taking place this Saturday, March 16. Marking the start of the 2013 American Le Mans Series season, the half-day run at Sebring is seen as a dress rehearsal for the big daddy, the 24 Hours Of Le Mans, and as such features a wide array of teams, cars, and drivers.
For those that aren’t familiar with ALMS or the Le Mans Series, SpotterGuides.com has put together the official guide for this year’s race (we posted it below, but a larger, full-size image can be found here). And as a further help, we’re going to break down the various racing classes, along with the manufacturers that compete there.
The cream of the crop in the ALMS is the P1 class, also known as LMP1. These prototype racers are the fastest closed-wheel racers you can find. This year’s field includes a pair of Audi R18 E-Tron Quattros, an HPD ARX-03C, two Toyota-powered Lolas, and the DeltaWing LM12.
P2 is a privateer class of prototype racers, while P1 is intended for manufacturer-backed teams. As such, the cars aren’t quite as powerful or advanced. P2 is dominated by HPDs, with four ARX-03Bs. A sole Zytek Nissan rounds out the field.
PC is short for Prototype Challenge. It’s a one-make class that utilizes spec engines. All seven teams are campaigning Oreca FLM09s.
The largest class in this weekend’s race is also the one that the average fan will most easily recognize. GT, short for Grand Touring, is based entirely on production cars. In the main GT class, we have two Corvette ZR1s, two Ferrari 458s, two BMW Z4 GTEs, two of the new SRT Viper GTS-Rs, and two Aston Martin Vantage GTEs. Porsche, meanwhile, is running a pair of 911 GT3 RSRs.
Finally, the GTC class is a Porsche only class, based upon the 911 GT3 Cup, as opposed to the racier RSR. With 11 entries, it’s the second largest class, behind GT.
There’s testing and qualifying for the race all week, but the big show itself starts this Saturday, at 10:45 am (Eastern). Race coverage for American viewers starts at 10:30 am, on Speed Channel. Both qualifying and the 12 Hours will be streamed online, as well. Head over to the American Le Mans Series website for details.

Porsche: New GT3 “Shifts Like No Other Car With A License Plate”