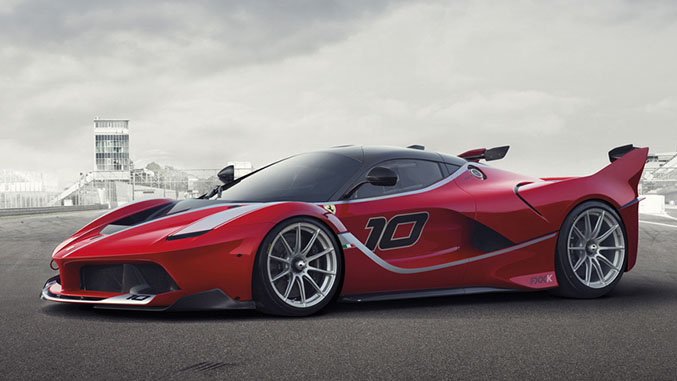 Not content to let McLaren’s P1 GTR hog all the hyper track-car headlines, Ferrari has just pulled back the curtain on the FXX K, a track-focused beast based on the LaFerrari which gets more power, less weight, and a whole lot of aero dynamic tweaks. As part of the FXX program, the FXX K will be strictly for track use, and it’s worth noting that it doesn’t qualify for any race series currently running. But anyone who’s fortunate enough to get behind the wheel of an FXX K probably won’t be very concerned with that after they drop the hammer in the latest and greatest offering from Maranello.
“Unfettered by homologation and racing regulations, the FXX K will never be used in competition. It was, in fact, developed to be completely uncompromising, incorporating technological innovations that will guarantee an unprecedented driving experience to the exclusive group of Client-Test Drivers with whom the Prancing Horse will roll out a test programme over the coming two years” says Ferrari’s press release. To that end, the FXX K is powered by a 6.3-liter V12 that makes 848 hp, up from 789 in the standard LaFerrari, by way of new camshafts, mechanical tappets, redesigned intake manifolds and a straight-through exhaust system (!).

Combined with an electric motor that makes 187 horsepower instead of the standard 160, the grand total rings in at a fairly astounding 1035 horsepower, with torque promised to be “in excess of 664 lb-ft”, though that number is actually 51 pound-feet lower than the standard LaFerrari’s. While performance figures have yet to be announced, with the standard car’s sub 3-second 0-60 mph time and a top speed of 217 miles per hour, it’s safe to say the FXX K will be extremely quick.
To look at the FXX K it’s obvious that there’s more to this package that a simple boost in power. Lessons learned from the company’s successful GT racing program are evidenced in the two-part front splitter, vertical fins along the flank and rear, massive rear diffuser, and dynamic rear wing. All told, these modifications contribute as much as 50 percent more downforce in the ‘low drag’ setting and 30% more at max.

Aston Martin DB10 to Star in the Next James Bond Film