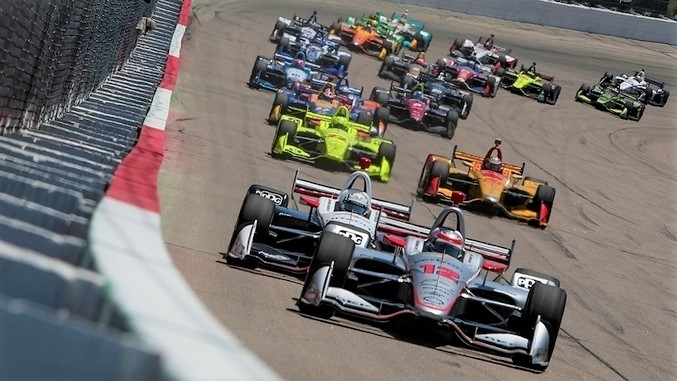 F1 and IndyCar ran on the same weekend for the first time this year on May 11-12. This inspired us to comment on the relative success of each series in providing racing entertainment. Admittedly, our hypothesis is that IndyCar puts on a better show, but we're sufficiently interested in reality to want to check this out during the 2019 season.

In a nutshell, if you didn't watch both the Spanish Grand Prix and the IndyCar Grand Prix, the IndyCar event was hands-down more engaging. And honestly that assessment includes the F1 bias we bring to the table: we are avid fantasy F1 players and frankly, we just care more about F1. But, with each passing year we're increasingly wondering why.

Naturally, the problem for F1 starts with this: Lewis Hamilton essentially led all but the first 6 feet of the race. Races where someone leads pretty much flag to flag are, often, boring. Boring was the order of the day at the front of the pack in Spain because Bottas also effectively had his position (P2) for all but the first 6 feet of the race but never got close enough to challenge for the lead. Which leads us to our first substantive comment that the standing start in F1 is clearly covering up for a problem in actual competition. The best one can say, is that the standing start doesn't ruin the race. But the first lap already is plenty exciting, so the standing start, if it adds anything, adds to something that already works. "Gilding the lily", they used to say. Not a bad thing, but skepticism is in order for what follows.

Thinking about things that happen after the first lap, how hard is it to comprehend that big aero equals small racing? Apparently harder than we think. In the event, the most exciting thing in the Spanish GP was trying to comprehend Ferrari's pit strategy, tire choices and team order decisions. We're speculating, but we're pretty sure they serve lasagna in the Ferrari pits, and they're Bolognese and thus great at cooking, so the entire team is distracted during the middle of the race. The lasagna must have been pretty darn good in Spain…

The other semi-interesting battle was Grosjean vs. Magnussen. Like Perez vs. Ocon in 2018, this one appeared to be stupidity mixed with high risk. Hard to understand. We'd whack both drivers with a wooden spoon, and apparently Gunther Steiner did.

Now look at the IndyCar Grand Prix. We've never been fans of the Indy road course, but it worked well enough. The passing point in T1 is reliable, whereas the Barcelona circuit doesn't offer much in the way of passing. That's a McDonald's vs. Burger King comparison, but better is still better.

Mediocre tracks aside, Indycar has cars that change their dynamics more during the course of a race and thus provides the opportunity for drivers to perform. Or not. In the Indy race, Felix Rosenqvist, Scott Dixon, Jack Harvey, Josef Newgarden, Patricio O'Ward and Simon Pagenaud all did interesting things that looked like attempts to lead or were actual leading. That's a lot more leadership than in the Spanish GP.

Also, the fact that the IndyCar winner (Pagenaud) led only the last 1.8 laps was exciting. Coming from 7 seconds back was thrilling. Doing all that with no push to pass, while Dixon had 15 minutes of button left, was proof that Pagenaud is still a great driver.

Yes, rain is a great equalizer — of cars. And a great differentiator — of drivers. So, perhaps, when we go to F1 vs. IndyCar: Round 2, we'll see something different. Monaco and the Indy oval certainly couldn't be more different as tracks (other than that they are both super-famous). But we're not sure the result will be.