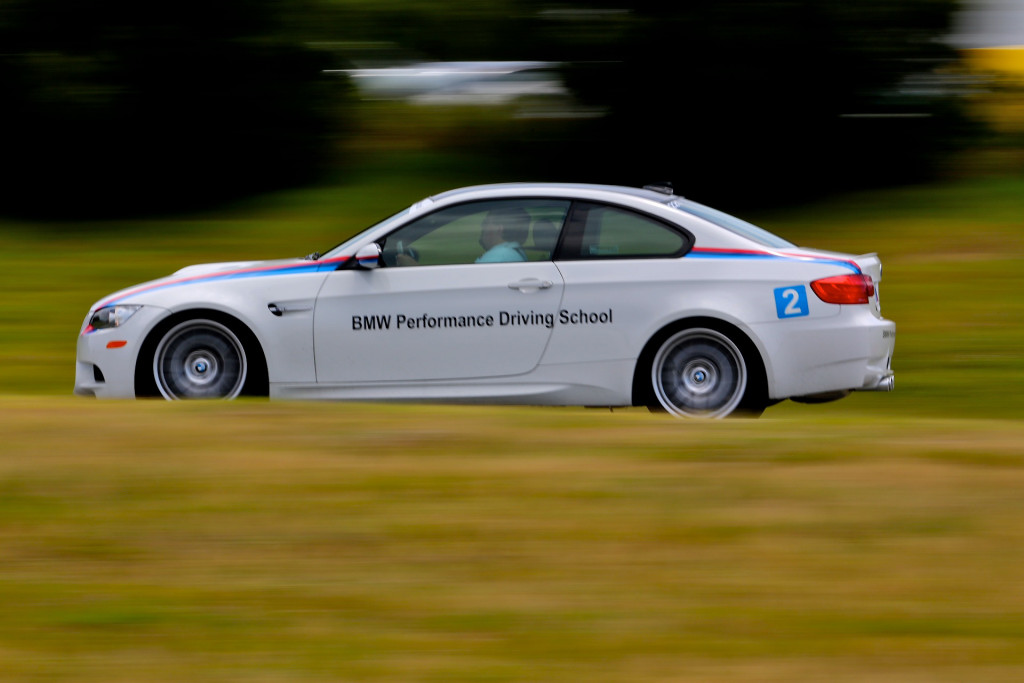 From the November 2012 Issue of Winding Road
—Spartanburg, South Carolina
In South Carolina, on the same large campus as a BMW factory and museum, there is a place where German motors scream louder than they can on any public road, and large amounts of rubber are sacrificed to the driving gods. This is the home of the BMW Performance Driving School, where past and future meet. But, we found, “the moment” is all there is when you’re behind the wheel of a high-powered BMW, testing the limits of both automobile and driver. BMW asked us to visit this great place and experience the driving course, and, as is our want, we enthusiastically accepted.
Our group of journalists was split up into two smaller groups, and we started off the driving for the day in the BMW M3, while the rest went to the skid pad we’d see later. We followed our instructors down to one end of the large track they have on their campus. There we lined up in a spot where we’d gather speed before what was about a 90-degree left turn into a short, bendy stretch that opened up onto a wide, long straightaway on the left. From there, we’d cut across about halfway down the straightaway to line up back at the beginning.

Here, we were really learning how to hit that first corner. It required heavy braking beforehand, with smooth turn-in while looking down at the next apex. Throughout each track experience, instructors were posted on foot at the crucial spots, with their voices radioed into each vehicle to give us constant feedback while we drove. This was an especially helpful tool, because the pros were able to see exactly what we were doing and where we were looking, and we could hear what we needed to correct, as well as the common mistakes the rest of the group was making.
After getting a pretty good handle of those turns—as well as the points the instructors would likely be driving home for us today—we switched into the BMW 1-Series M Coupe and headed to a short handling course. It started on a small straightaway with cones set up as a slalom in the middle. Then a long, sweeping right-hander turned into a sharp right into a downhill ess, before another right toward the start/finish line. It was pretty low-speed throughout, and the trick was mostly in carrying as much speed as one could through all the various turning maneuvers. It was very much like driving autocross, only on a small track instead of a coned-off parking lot. Laps were short and dizzying, and the challenge was in proper handling rather than outright speed. Here, the instruction was a lot lighter, and we were allowed to really get in the zone as we tried to feel our way through the course faster and faster.
We brought the cars back in for a short break, then got into the new M5 to take it over to the skid pad. The sprinklers were on, and the car was in M Dynamic Mode, making it no difficult task to get the car to pirouette on the slick surface. We practiced skid maneuvers, focusing on CPR—Correct, Pause, and Recovery. It quickly became clear how important it is to look where you want to go. Look into the turn, toward the inside of the skid pad and a controlled recovery is much easier. This is something we’ve known, but in practice, it still takes some conscious effort to keep our eyes pointed in the right direction. Once we got comfortable with the CPR, and learning the balance of the M5, we got a few minutes to attempt a controlled drift around the skid pad.
Next, we got back in the M3 for some hot laps. For this, we used the full track, which included the corners we had practiced earlier, plus a long straightaway that ends in a hard left leading up onto the skid pad. Here we got to put together all the skills we had been practicing throughout the day—especially braking, timing turn-in, and of course, looking far into the corners. This meant waiting as long as we safely could, braking incredibly hard, looking forward as far as we could, and smoothly aiming the car through the apex with balance before powering out of the turn.

After a healthy amount of laps in the M3, we switched back into the new M5 to tackle the same course with more power. The actual techniques we used were the same, but we had to perform them all in rapid succession, while still trying to maintain our composure, smoothness, and driving line. This was easier at first, when our adrenaline was surging. After more and more laps, though, the fatigue of a day of hard driving began to set in, and it took a lot more concentration to maintain our speed and precision.
After we were flagged back into the pit area, we were directed back to the staging area (that’s where the water is, which was very important to us at this point in the day). We returned to the handling course in the 1M Coupe for some timed runs. Here, on the smaller course, all the students had a chance to compete for the best time on this autocross-like setup. It was a nicely calm experience compared to the hot laps we had just done in the M5, but the sense of competition kept it exciting, and the level of confidence we had amassed allowed us some bit of comfort. Each timed lap we did was faster than the one before it, but, alas, there were faster drivers than us on the course that day.
When we finished with that and gloated and congratulated each other, we were given the opportunity to ride along with the instructors for some hot laps on the big track in the M5. Here, we got to see how the M5 handled in the hands of a professional. Close to the limit, it was an exciting experience, being tossed about the course, but it was entertaining and not scary. Even when the competitive drifter got behind the wheel and made a loud, smoky mess of the corners, the M5 felt surprisingly composed from the passenger’s seat.
There are other driving opportunities available at the Performance Center for those who are interested. While we were there, we saw a group of consumers taking their BMW X vehicles on the off-road course the school has set up on campus. If you’re interested, we recommend checking out BMW’s website to learn more about the various courses, the facility, and pricing. BMW buyers can even plan to pick up their car at the Performance Center, and get to know how to really drive their car before even taking it on public roads.
We found our day at driving school to be really helpful in letting us practice our skills, learn new ones, and get into some awesome German machinery. Don’t be surprised if you find us on the track in Spartanburg again in the future.
Tags:
BMWBMW M3BMW Performance Driving Schooldriverhelpful toolPerformance CenterrubberSouth Carolina